Ryanair shifting growth away from UK despite deal on Stansted 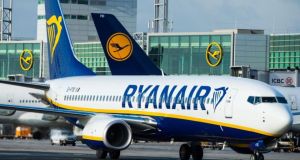 Ryanair’s chief commercial officer David O’Brien said the new agreement with Stansted did not mark a change from its policy of shifting some growth away from the UK following its Brexit vote. Photograph: Getty Images

Ryanair is maintaining that it will shift some growth away from Britain this year in the wake of announcing a new deal with London’s Stansted Airport.

The Irish airline said on Thursday that it has struck a new deal with Stansted’s owner, Manchester Airports Group, that will see it add nine new routes and fly 20 million people a-year to and from the London gateway.

Speaking after the announcement, Ryanair’s chief commercial officer David O’Brien said the new agreement with Stansted did not mark a change from its stated policy of shifting some growth away from the UK following its Brexit vote.

Mr O’Brien pointed out that the expansion that Ryanair plans for the UK this year would have been significantly higher had its electorate voted to stay in the EU last June.

“If you take Romania and Bulgaria combined, which is 30 million people, our growth there will be more in absolute terms than it will be in the UK this year,” he said.

Mr O’Brien also noted that the company had opened new bases at German airports including, Berlin, Frankfurt, Hamburg and Nuremberg, as well as the Czech capital, Prague, which indicated a growing focus on central Europe.

He was also sceptical about suggestions from the UK government that a weakened sterling would help boost visitor numbers to Britain. “We don’t see people racing to the beaches of Harrogate,” Mr O’Brien said.

Stansted is already a significant base for Ryanair . Mr O’Brien said that the airport’s owner recognised the uncertainty that the Brexit vote has cast over the UK aviation industry and the agreement it made with the airline for its latest expansion took that into account.

The carrier will step up flights on 13 existing services to France, Italy and Portugal from Stansted.

“Having grown our London Stansted traffic from 13.2 million in 2013 to over 20 million this year, this new deal will allow Ryanair to continue to expand our route network at Stansted, our largest European base,” Mr O’Brien said in a statement.

Stansted chief executive, Andrew Cowan, said that the agreement builds on Ryanair’s existing business at the British airport, from where it serves 140 destinations.

He added that the Irish carrier would put Stansted on track to handle more than 25 million passengers a-year over the next 12 months.

Ryanair is likely to begin announcing its winter 2017/18 schedule in coming weeks.