Fáilte Ireland tees up for new swing at golf tourism 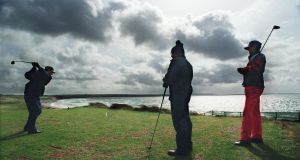 Teeing off from the 16th at Ballybunion. Photograph: Frank Miller

Fáilte Ireland will take a fresh swing at the lucrative golf tourism market in 2019 as part of preparations to offset the impact of Brexit.

Fáilte Ireland and the all-island marketing body Tourism Ireland linked up last week to sell Ireland as a premier destination for golfers at the PGA Merchandise Show in Orlando, Florida, one of the largest golf trade shows in the world.

Some 13 Irish tourism businesses attended the show alongside the two tourism bodies, making pitches to golf journalists, professionals and enthusiasts. They included the K Club in Co Kildare, the Royal Dublin Golf Club, the Carne Golf Links in Co Mayo and the Trump International Golf Club in Doonbeg, Co Clare.

More than 200,000 overseas visitors play golf in Ireland every year, accounting for more than 1.7 million bed nights. They are estimated to contribute almost €270 million to the Irish economy.

Tourism chiefs are concerned that a relatively strong euro versus sterling will hurt visitor numbers from Britain to Ireland this year, prompting renewed focus on maximising high-spending visitors from North America.

Up to 50 per cent of golf tourists come from the US.

Each golf visitor from North America is worth up to €1,800 on average to the Irish economy, which is three times more than a leisure visitor – and 80 per cent of their spending is on activities not related to golf.

“Golf plays a significant role in Irish tourism and it is important that we do all we can to support the industry to reach key overseas markets,” said Paul Mockler, head of commercial development at Fáilte Ireland.

Bringing in more golfers is also expected to help with the regional spread of tourism, something which tourism marketers have turned their attention to given capacity constraints in certain areas during peak season.

“With some of our finest golf courses based in areas which have the capacity to host more international visitors, we believe that golf is an important driver in attracting more visitors to the regions,” Mr Mockler said.

1 Irish company paid €1.2m a year by collapsed Blumenthal-linked Australian restaurant
2 Hugo MacNeill steps back from Goldman Sachs role
3 Why bosses should not be afraid of speaking out on Instagram
4 Should AIB compensate me for upsetting letter on arrears?
5 Greencoat Renewables buys Clare wind farm for €35.4m
6 Irish economy to grow by 3.4% this year, predicts EY
7 ‘Germans are very efficient and reliable. Cancelling is alien to them’
8 Poll on second election, concerns over Irish pension gap, and Ireland’s rich list
9 Legal eagles yet to land; economy to grow 3.4% this year; and CEOs on social media
10 Tax shifts won’t drive multinationals out of Ireland - Moody’s
Real news has value SUBSCRIBE