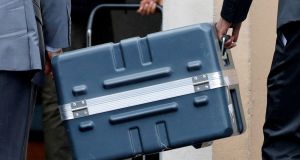 A case containing the black boxes from the crashed Ethiopian Airlines Boeing 737 MAX 8 is brought to the headquarters of France’s BEA air accident investigation agency in Le Bourget, north of Paris.

Ethiopian investigators have called on Boeing to carry out a full review of the anti-stall systems on its 737 Max aircraft before they are allowed to fly again after finding pilots were not to blame for a crash near Addis Ababa last month.

The preliminary findings will heap pressure on the embattled aircraft manufacturer after the same systems were implicated in the crash of a Lion Air flight in Indonesia last year.

The twin crashes have provoked a crisis of confidence at Boeing and the procedures used by the US Federal Aviation Administration (FAA) to certify aircraft as safe to fly.

Ethiopian minister of transport Dagmawit Moges said the crew of the Ethiopian Airlines flight from Addis Ababa to Nairobi on March 10th “performed all the procedures repeatedly provided by the manufacturer but were not able to control the aircraft”.

As result, investigations have concluded that Boeing should be required to review the flight control system on its 737 Max aircraft before the jets are permitted to fly again, she said.

Aviation regulators grounded the 737 Max worldwide in the wake of the crash, raising public concern over the safety of the Max, the newest version of the 737.

The tragedy followed the crash in October of a Lion Air 737 Max flight in Indonesia, in which the so-called “manoeuvring characteristics augmentation system” (MCAS) appears to have contributed to bringing the aircraft down.

MCAS is an automated stall-prevention system that if triggered can, under certain circumstances, try to force down the nose of the aircraft even if pilots are flying it manually, leading to a steep dive and making the jet hard to control. MCAS receives information from sensors on the angle of the aircraft and is unique to the Max.

Earlier versions of the 737 have different stall-protection systems that do not automatically drive down the nose. Some 346 people died in the two accidents, which left no survivors.

“Since repetitive, uncommanded aircraft nose-down actions were noticed in this preliminary investigation, it is recommended the aircraft flight control system shall be reviewed by the manufacturer,” Ms Moges said.

Amdiye Ayalew, head of the Ethiopian investigation, said it was still too early to say whether there was a “structural design problem” with Boeing’s aircraft. However, he also said that, from data collected, there was no evidence that any foreign object had damaged the aircraft and caused the crash.

Asked whether Boeing agreed with the preliminary investigation, he said the US National Transportation Safety Board, which was representing Boeing in the probe, was “in agreement”.

Boeing said it was reviewing the report. In line with international rules on air accidents, the preliminary report did not attribute blame. A final report is not due for many months.

Aviation consultant John Strickland, of JLS Consulting, said based on the “very limited information” that was provided by the Ethiopians on Thursday, there was not “complete clarity” that could determine when Boeing’s Max aircraft could fly again.

“There is no complete clarity about what happened with the Ethiopian Airlines flight and whether the software fix and additional pilot training would be regarded as a sufficient solution to get the planes back into commercial service,” he said.

The results of the preliminary investigation led by Ethiopia’s accident investigation bureau and supported by European investigators were presented by Ms Moges and Mr Ayalew at a press conference in Addis Ababa on Thursday morning.

Ethiopian Airlines said the preliminary report “clearly showed” that the pilots had followed the emergency procedures recommended by Boeing and approved by the FAA.

“Despite their hard work and full compliance with the emergency procedures, it was very unfortunate that they could not recover the aeroplane from the persistence of nose diving,” the airline said in a statement.

The findings will keep the spotlight on Boeing, which last week announced substantial changes to its flight-control systems, a tacit admission that the 737 Max may not have been safe to fly as initially designed.

US House and Senate committees are holding hearings to probe the safety certification of the 737 Max by the FAA, while the US justice department is investigating whether Boeing gave the FAA incomplete or misleading information related to the aircraft.

The FAA’s pre-eminent position among global aviation regulators had come into question as a result, aviation experts said.

The manufacturer could be forced to pay billions of dollars in compensation to airlines with grounded aircraft, repairs of existing aircraft and legal settlements to the families of victims, analysts said. Shares in Boeing have fallen about 9 per cent since the Ethiopian crash.

Ethiopia’s attorney general was already investigating how the families of the victims might seek compensation from Boeing, Ms Moges said.

“We are going to follow legal procedures,” she added. – Copyright The Financial Times Limited 2019