Passengers stranded in Spain's Palma airport faced uncertainty over how they would return from holiday after the collapse of British travel firm Thomas Cook. Video: Reuters 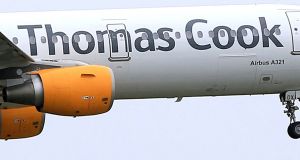 The first flight repatriating stranded Thomas Cook passengers from New York was due to arrive in Manchester at about 5pm Irish time. File photograph: PA Wire

The collapse of Thomas Cook spread chaos through the international travel industry on Monday as the failure of the 178-year-old travel company left hundreds of thousands of travellers stranded and sent business partners reeling.

Thomas Cook’s board said on Monday morning that the failure of rescue talks between banks, shareholders and the UK government meant “it had no choice but to take steps to enter into compulsory liquidation with immediate effect”.

The collapse of the travel company leaves 21,000 jobs at risk and 150,000 UK holidaymakers stranded abroad, reliant on an effort by the government’s Civil Aviation Authority (CAA) to put together the biggest emergency repatriation in peacetime.

The first flight repatriating stranded Thomas Cook passengers from New York was due to arrive in Manchester at about 5pm Irish time.

Fallout from the collapse spread quickly through the international travel industry due to the Thomas Cook’s complex supply chain, with 350,000 non-UK nationals also abroad on the tour operator’s holidays.

In Germany the group said it had stopped selling holidays for all its local travel companies, which include Neckermann Reisen, Öger Tours and Thomas Cook Signature. According to German news agency DPA, 140,000 German travellers have been affected.

Spain’s opposition Ciudadanos party warned that thousands of jobs were at stake in the Canary Islands and the Balearics, while the Turkish Hoteliers Federation highlighted an impending crisis facing hotels that worked solely for Thomas Cook.

The Irish Travel Agents Association said a minimal number of holidaymakers from the Republic were affected. Thomas Cook does not operate any flights from the Republic although about a dozen flights had been leaving from Belfast each week over the summer.

The collapse is a huge blow to Chinese conglomerate Fosun, Thomas Cook’s biggest shareholder, which had proposed to contribute £450 million (€500 million) to a rescue package. The group said it was “disappointed” and that “its position remained unchanged throughout the process, but unfortunately other factors have changed”.

Andrea Leadsom, Britain’s business secretary, will launch an investigation into the company’s demise, including the role of management, who were on Monday criticised for taking large salaries while overseeing the decline of the group under chief executive Peter Fankhauser.

Restructuring specialist AlixPartners was appointed to manage the process, subject to the approval of the court. Thomas Cook said that it expected AlixPartners to work with the CAA to arrange the repatriation of its customers.

The UK government, which was dragged into discussions after Thomas Cook approached Downing Street for a bailout last Friday, had been under pressure to keep talks moving. “Having a granny stranded in Tunisia is not a good look,” said one person familiar with the discussions.

British prime minister Boris Johnson said en route to the UN General Assembly in New York that “it’s true a request was made to the government for a subvention of about £150 million. Clearly that’s a lot of taxpayers’ money and sets up a moral hazard in the case of future such commercial difficulties that companies face.”

He added: “One way or the other, the state will have to step in to help stranded holidaymakers. One is tempted to reflect on whether the directors of these companies are properly incentivised to sort these matters out.”

Transport secretary Grant Shapps said the government had been asked for between £150 million and £250 million but added that the bailout money would only have kept Thomas Cook afloat for a short period if it had been agreed. He blamed the shift of business from the high street to online for the demise of Thomas Cook.

Shadow chancellor John McDonnell said the government should not have stood by while the company collapsed. Mr McDonnell said executives at Thomas Cook should be forced to hand back their bonuses and – if that was legally impossible – they should do so voluntarily.

The CAA said that customers yet to travel with Thomas Cook from the UK “must not go to the airport”. It added that all of the company’s bookings had been cancelled.

Mr Fankhauser said the company had worked “exhaustively” to salvage a £1.1 billion rescue deal. The company had a last attempt to secure a rescue deal in a drawn-out day of negotiations at law firm Latham & Watkins on Sunday.

“It is a matter of profound regret to me and the rest of the board that we were not successful. I would like to apologise to our millions of customers, and thousands of employees, suppliers and partners who have supported us for many years,” he said.

Thomas Cook’s lenders said they were unable to extend any further financial support after backing the company over the past year marked by “outflows of about £1 billion”, and were “disappointed” the rescue did not materialise.

Other airlines, including Virgin Atlantic and EasyJet, have been called in to bring home far-flung customers in an operation that the CAA said should take two weeks.

Civil Aviation Authority chief executive Richard Moriartysaid it had launched “what is effectively one of the UK’s largest airlines, involving a fleet of aircraft secured from around the world. The nature and scale of the operation means that unfortunately some disruption will be inevitable”.

Thomas Cook’s collapse comes eight months after it announced an intention to sell its profitable airline as a means of shoring up the tour operator business. But in May it revealed a £1.2 billion net debt pile. It also recorded a £1.1 billion writedown tied to MyTravel, the UK holiday company with which it merged in 2007.

In July, Thomas Cook said it was in “advanced discussions” for a £750 million recapitalisation, funded by Fosun. The sum was subsequently increased to £900 million after demands for equity in the business by a group of Thomas Cook’s bondholders.

“There’s been a continuous knock-on effect,” said Richard Clarke, an analyst at Bernstein. “Their suppliers get wary, hotels ask them for more money up front, consumers become less willing to book with them . . . I’m sure that’s why we’ve seen continuous increases in the size of their rescue package.”

The company has also engaged a number of advisory services, including Latham & Watkins, Slaughter and May and Clifford Chance, the law firms, FTI Consulting, and AlixPartners. “Everyone’s fees are enormous,” said one source familiar with the talks.

The rescue operation required for customers of Thomas Cook is far larger than that of Monarch, which collapsed in October 2017 when it was the UK’s fifth-biggest airline. That incident required the Civil Aviation Authority to charter about 30 aircraft to bring about 85,000 Monarch customers back to the UK at a cost of £60 million.

Customers who have booked package holidays will be eligible for compensation under the UK’s Atol (Air Travel Organiser’s Licence) protection scheme. The CAA said it would aim to compensate customers within 60 days.

Those who have booked flights with Thomas Cook Airlines are unlikely to be protected by Atol and must instead claim via their travel insurance or credit card company. – Copyright The Financial Times Limited 2019