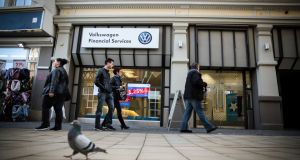 Volkswagen is more than just a scandal-plagued automaker. It is also one of Europe’s largest banks, and its loan portfolio appears vulnerable to the emissions-cheating crisis that has engulfed the company.

Volkswagen Financial Services, the company’s in-house bank, has been an important element in Volkswagen’s rise to become the No. 2 carmaker in the world after Toyota. The unit has helped speed Volkswagen’s growth by lending money to buyers, financing leases and extending credit to dealers. It even offers checking accounts.

Financial services are a major source of profit for Volkswagen. In the first nine months of 2015, banking activities generated operating profit of €1.6 billion. That compares with €2.2 billion the company earned from Volkswagen brand passenger cars. But the finance unit’s focus on a single asset - Volkswagen cars - could endanger those profits if the scandal continues to undercut new-car sales or undermine the value of used vehicles. A particular concern is leased vehicles.

Typically, Volkswagen and its dealers are obligated to buy back leased cars when the leases - valued at about €20 billion - expire. If their value drops more than planned, Volkswagen must absorb the difference.

The risks have drawn scrutiny from regulators and prompted all three major credit-rating firms to downgrade debt issued by Volkswagen, a company once considered so solid that even during the financial crisis its bonds found buyers. In December, for example, Standard & Poor’s cut its ratings for Volkswagen Financial Services and the parent company by one notch to BBB+, S&P’s fourth-highest grade. That is worse than Toyota, BMW and Daimler, but still better than U.S. competitors like Ford.

Investors’ view of Volkswagen as a creditor “has deteriorated quite significantly,” said Yasmina Serghini, a senior credit officer at Moody’s Investors Service, which downgraded the financial-services unit one notch to A1 from Aa3 in November. The risk increases, she said, the longer it takes Volkswagen to reach agreement with US regulators on how to make its diesels compliant with air-quality rules.

All large automakers have divisions that provide financing to car buyers. But

Volkswagen was particularly aggressive in the way it used its finance arm to pursue its earlier ambition, since abandoned, of becoming the largest carmaker in the world. With €114 billion in loans and other assets, Volkswagen Financial Services is considered important enough to be overseen directly by the European Central Bank, rather than solely by local regulators. The only other car-company bank to earn that distinction is RCI Banque, Renault’s finance unit. They are among 129 banks, out of about 5,500 in the eurozone, deemed worthy of special central-bank scrutiny because of the possibility they could damage the broader financial system if something went wrong. There are no signs that the problems of Volkswagen Financial Services represent a risk of instability in the eurozone financial system.

Volkswagen is contractually obligated to support the unit and has enough cash to do so. The emissions scandal threatens

Volkswagen’s finance unit in several ways. One is that investors will demand higher interest rates on Volkswagen debt and raise the company’s financing costs, adding to the already heavy financial impact from recalls, repairs, fines and lawsuits.

Volkswagen would not be able to pass the higher rates on to buyers without hurting sales. The banking unit could also suffer losses on the €14 billion in credit it has extended to dealers. If sales slump, some dealers might not earn enough money to repay their loans. “The performance of the dealer loan book is to a large extent related to the well-being of the related car manufacturer and its brands,” Moody’s said in a November report. Values of Volkswagens are falling in the United States. Kelley Blue Book estimates that prices for used Volkswagens have declined 16 per cent since the scandal became public in September.

Frank Fiedler, chief financial officer of Volkswagen Financial Services, said in a statement that “no effect on the resale value of vehicles has been established so far in the majority of the markets.” The unit has set aside enough money to cover any losses that might materialise, Fiedler said in a written response to questions.

Volkswagen does not have any trouble raising money, he said, although he said the company had sometimes had to pay higher interest rates. The financial services unit makes heavy use of asset-backed securities, bundles of loans sold to investors who are then entitled to proceeds from the payments. The transactions allow Volkswagen to raise money for new loans. In October, after the scandal broke, Fiedler said, Volkswagen paid the lowest interest rate since the financial crisis on an asset-backed security tied to Spanish auto loans. But, in a sign that investors are concerned about the scandal, Volkswagen had to pay investors about half a percentage point more in November, compared with a similar issue in May, to get them to buy an asset-backed security tied to leased vehicles in Germany.

Whatever happens, Volkswagen is likely to keep offering competitive lending rates to customers, although it might cost the company more to do so. Fiedler of Volkswagen Financial Services said that it was in the company’s “own interest that we always offer our customers attractive financing and leasing conditions.”