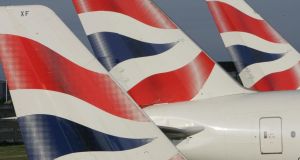 A British Airways spokesman said “our proposed pay offer of 11.5% over three years is fair”

British Airways (BA) pilots voted in favour of industrial action as part of an accelerating pay dispute that is threatening to disrupt flights at the height of the summer travel season.

Pilots backed action, including a walkout, with a 93 per cent majority, the British Airline Pilots Association (Balpa) said in a statement on Monday.

Meanwhile British Airways is due to appear at the UK’s high court on Tuesday to seek an injunction to halt any strike.

Dates for a walkout have not been finalised, the union said, adding that negotiations were on hold until after the court proceedings. The union said it remained open to reaching a resolution with the airline, part of International Consolidated Airlines Group (IAG) .

“This strong result demonstrates the resolve of BA pilots, and shows BA that it must table a sensible improved offer if a strike is to be averted,” said Balpa general secretary Brian Strutton. “It is BA who has regrettably chosen to drag this out into the summer months.”

A strike, if it goes ahead, would be the company’s first involving pilots for about four decades. The demands relate to pay, profit-sharing and a share-awards programme, and come after the cockpit crew took salary cuts in the wake of the financial crisis to help bolster the airline’s finances, according to the union.

“We are very disappointed that Balpa has chosen to threaten the travel plans of thousands of our customers,” a British Airways spokesman said . “Our proposed pay offer of 11.5 per cent over three years is fair.”

IAG shares reversed earlier gains of as much as 1.9 per cent and traded 0.2 per cent higher at 450.80 pence at the close in London.

The dispute highlights the challenges facing European airlines in the middle of the warm-weather holiday season. In addition to possible walkouts, carriers have been hit by flight cancellations due to air traffic controller staff shortages. Ryanair and Lufthansa pilots are also weighing possible strike action.

Walkouts by cockpit crews are particularly disruptive to airlines because they can ground flights. – Bloomberg

1 Coronavirus: We must save lives but we also need to live
2 Avoca warns of redundancies due to coronavirus
3 Grounded Aer Lingus pilots develop fix for turnaround glitches
4 Moving in and out of lockdown is a recipe for economic disaster
5 Anti-money laundering rules to be made law after State fined €2m for delays
6 Virgin Media vows to withhold sports channels until Eir ‘pays its bill’
7 Taxi app Free Now blames ‘technical issues’ for driver payment delays
8 Non-executive directors face new paradigm in the boardroom
9 Ufurnish: ‘It’s like Skyscanner, but for furniture’
10 National Broadband Plan customers to get download speed boost
Real news has value SUBSCRIBE