Bill tabled in US Congress to outlaw ‘flag of convenience’ airlines 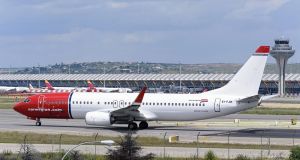 US aviation unions accuse Norwegian Air of using its Irish subsidiary as a flag of convenience to hire pilots and crews cheaply from agencies.

US legislators want to ban so-called “flag of convenience” airlines in a move one says was prompted by Irish-registered Norwegian Air International’s cheap transatlantic flights.

Scandinavian group Norwegian Air Shuttle, which is struggling with rising costs and increasing competition, uses Irish-registered subsidiary Norwegian Air International to operate some low-cost flights between the US and Europe.

US aviation unions accuse the group of using its Irish subsidiary as a “flag of convenience” to hire pilots and crews cheaply from agencies, allowing it to skirt protections offered by European Union labour laws and compete unfairly with their carriers. Norwegian has always denied this.

Members of the US Congress, led by Oregon-based Democrat Peter DeFazio, have tabled legislation that would prevent the US from issuing permits to foreign airlines engaged in this practice, citing Norwegian as a leading example.

Mr DeFazio, co-sponsor of the legislation and chairman of the powerful House of Representatives transportation and infrastructure committee, recently repeated his claim that Norwegian Air International is based in the Republic because the State has “lax labour laws”.

The congressman, whose supporters include powerful US aviation unions, described the problem as a “plague” and pledged that the proposed legislation, the Fair and Open Skies Act, would end it.

Both Democrats and Republicans support the Bill, which observers believe has a good chance of getting through lower House of Representatives. It would then have to get through the Senate before it could become law.

Norwegian Air Shuttle said the proposed legislation would apply to new foreign air carrier permit applications to the US department of transportation, and would not affect existing licences granted to the group’s subsidiaries, including Norwegian Air International.

“Norwegian’s Irish subsidiary was granted a foreign air carrier permit following a thorough process conducted by the US department of transportation, which involved both the US state and justice departments, and has led to lower fares, job creation and improved connectivity on both sides of the Atlantic,” said a spokesman.

“Opponents have no grounds to attach Norwegian to an anti-competitive attempt to deny consumers greater choice, better service and value for money as we fully comply with the relevant employment laws and regulations in all markets we operate.”

Claims by US aviation unions and others that Norwegian Air International was a flag of convenience led the federal department of transportation to delay the issuing of a permit to the Irish airline for three years, until December 2016.

Norwegian has postponed this summer’s services from Cork to Providence, Rhode Island, in the northeastern US and cut back on Shannon flights because of delays in delivery of the recently-launched Boeing 737 Max, which regulators grounded this year on safety concerns. The airline is offering passengers who booked Cork and Shannon flights alternative services from Dublin.