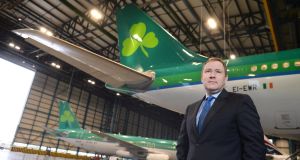 CDB said on Wednesday it had appointed Stephen Kavanagh, above, as a non-executive director to its board

CDB said on Wednesday it had appointed Mr Kavanagh as a non-executive director to its board.

Mr Kavanagh stepped down as Aer Lingus chief executive last year following a 30-year career with the Irish airline, much of it spent in senior roles. These included chief strategy and planning officer, chief commercial officer and corporate planning director.

While he was chief executive, Aer Lingus grew revenues by one-third to more than €2 billion. He also oversaw its sale to International Consolidated Airlines Group. Mr Kavanagh remained on the Aer Lingus board as a non-executive director.

Peter Chang, CDB’s chief executive, said the company was “thrilled” to welcome Mr Kavanagh to its board. “Stephen’s demonstrated track record in the airline sector will be a strong addition to our board and will further propel the growth and globalisation of our platform.”