The development was previously blocked on environmental grounds 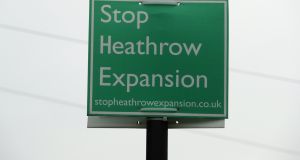 The expansion of Heathrow has been hotly contested for decades. Photograph: Getty

Britain’s top court gave the go-ahead for the expansion of Heathrow airport on Wednesday, allowing the £14 billion (€15.5bn) plan to proceed after decades of legal battles and political wrangling.

The ruling from the supreme court in London overturned a previous court decision that had blocked the plan on environmental grounds.

Heathrow, Britain’s biggest airport, is keen to proceed despite the plunge in air traffic during the Covid-19 pandemic that has seen it lose its crown as the busiest hub in Europe.

In February, a court had declared the expansion unlawful, ruling in favour of climate-change campaigners. The judge had said that a failure to take into account the British government’s commitments on climate change was “legally fatal” to the plans.

However, a supreme court judge told a virtual session on Wednesday that the government had taken climate-change commitments into account when designing its airport policy.“For these reasons the court unanimously concludes that the appeal should be allowed. The airport’s national policy statement is lawful,” Judge Philip Sales said.

Since February the aviation sector has been hit by its worst ever downturn, meaning Heathrow now has plenty of spare capacity, but the airport said another runway was still vital for the future.

“Demand for aviation will recover from Covid-19, and the additional capacity at an expanded Heathrow will allow Britain as a sovereign nation to compete for trade and win against our rivals in France and Germany,” a Heathrow spokesman said in a statement.

The airport is owned by Spain’s Ferrovial, the Qatar Investment Authority and China Investment Corp among others.

Heathrow is Britain’s biggest airport by value. The airport has two runways, compared with Paris’s and Frankfurt’s four and Amsterdam’s six. Before the pandemic it had no space to add new flights.

Heathrow and its supporters argue that Britain’s departure from the EU makes expansion critical to ensuring the country can increase trade with the rest of the world.

The project has been hotly debated in Britain for almost 50 years. The new runway was previously approved in 2009 before being scrapped the following year, and then approved again in 2018.

UK prime minister Boris Johnson has been a long-term opponent of it. As mayor of London he vowed in 2015 that he would lie down in front of bulldozers if necessary to stop construction of the third runway.

The latest decision represents a setback to wider hopes among climate campaigners of using Heathrow as a test case to develop similar legal challenges to heavily polluting transport, energy or other projects in other countries. – Reuters