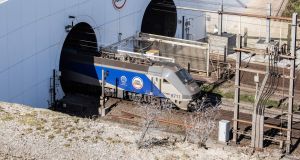 “I confirm the guidance of 2019 for €560 million EBITDA,” a Getlink spokesman said when asked about 2019 as the guidance was not included in the company’s trading update.

This target reflects Getlink’s reference scenario of Britain leaving the European Union without a divorce deal, he added.

The group, formerly known as Eurotunnel, also said in the statement it confirmed a core earnings target of €735 million for 2022.

However, previously the company saw core earnings exceeding €735 million in 2022.

For Getlink, which in July saw a no-deal Brexit as very likely, the stakes are high. In 2018, the group carried 21 million passengers, 17 million trucks, 2.7 million cars and 26 per cent of trade between Britain and the European Union, supporting thousands of jobs.

“A lack of clarity for all parties involved in the supply chain with regards to the Brexit outcome, the decline in consumption in the UK market as well as the slowdown in the German economy were all factors that weighed upon cross-Channel trade,” the company said in a statement.

Revenue for the July-September period came in at €305.1 million, while those for the first nine months of the year grew just 1 per cent to €828.1 million.

In August, to prepare for the day when Britain leaves the EU, Getlink announced a series of measures, including the creation of pre-boarding customs checkpoints called “pit stops”, and a 240-space secure parking zone for Britain-bound trucks.

The parking facility’s capacity grew to 290 spaces in the third quarter, Getlink added on Wednesday. – Reuters