Norwegian airline to add third US airport to Irish service 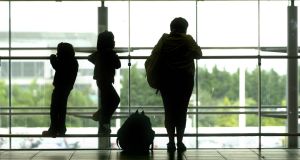 Norwegian Air International is due to give details of its proposed low-cost transatlantic services from Ireland. Photograph: Dara MacDonaill

Norwegian Air International has added a third US airport to serve the Irish flights that it plans to announce on Thursday.

The airline is due to give details of its proposed low-cost transatlantic services from Ireland at a launch in Cork Airport after winning approval from the US government and aviation regulator.

According to reports, it has also won approval to fly to Bradley International Airport in Connecticut. The airline is already known to have lined up two other US airports, Stewart in New York state and TF Green in Providence Rhode Island.

Norwegian will fly 12 times a week from Dublin Airport from next summer, serving both Stewart, which is about 90km from New York, and Providence, which is a similar distance from Boston.

Cork will have three flights to Providence, but could get further services to Stewart at some point in the future. Shannon and Belfast may also be in line for US flights.

Norwegian won support from politicians and business groups for its campaign for a US foreign carrier’s permit on the basis that it was going to launch transatlantic services from Cork.

The city’s airport, the second biggest in the Republic, has no direct US flights, something that business and tourist groups in the region argue would benefit the local economy.

There is also the possibility that Norwegian will plug some of its services into Irish low-cost giant Ryanair’s European network, as the pair are close to a deal that will allow their passengers transfer between flights.

Ryanair recently confirmed that it was in advanced talks with Norwegian about a transfer deal covering Cork; Barcelona, from where the Scandinavian group also intends flying; and London.

Meanwhile, the US airports to which it intends flying are also hoping that passengers travelling from Europe will use them as a transfer point to fly on to other destinations.

Norwegian’s Irish services will be Stewart’s only European flights when they launch next summer.