Best May on record for tourism despite drop in UK visitors 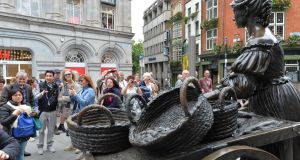 It was the best May on record for Irish tourism despite a decline in numbers coming from Britain – with just under one million visitors recorded in the North and Republic.

Figures for the first five months of 2016, themselves a record, were surpassed between January and May this year as airlines, hotels, guesthouses, and the wider hospitality industry continues to boom.

Numbers were up from the key North American, Australian and European markets but visitors from Britain - one of the island’s most significant markets by numbers - were down 6.8 per cent, a feature that was ascribed to currency fluctuations due to Brexit.

In 2016 the island welcomed a record 10.3 million overseas visitors delivering revenue of €5.3 billion and 2017 looks like being even better, with numbers for the January to May period this year already showing growth of 3 per cent.

Niall Gibbons, chief executive officer of North-South body Tourism Ireland said the numbers of visitors in May amounted to 943,300, an increase of 7 per cent on last year and making the month the island’s busiest ever May for Irish tourism.

After several years of ongoing “solid growth” he said it was particularly encouraging to see visitor numbers from North America increase by 23.6 percent

Tourism Ireland had prioritised North America for 2017, as a market which offers longer staying visitors who spend more. Key factors in the growth were additional airline seats across the Atlantic and more gateways across North America.

Visitor numbers from Australia and developing markets were also strong with a 21.7 per cent increase in 2017. Arrivals from Mainland Europe grew by 4 percent, with important markets like France, Germany, Spain and Italy continuing to perform well.

As anticipated, the currency challenge for Irish tourism is very real and the drop in British visitor numbers for the January to May period reflects that, Mr Gibbons said.

Short breaks in Ireland have been particularly hit by the decline in sterling, making the Republic more expensive for British visitors. Economic uncertainty was also believed to be making British travellers more cautious about their discretionary spending.

Mr Gibbons said the key message for the industry in the light of the British figures was to keep prices down. “Competitiveness and the value for money message are more important than ever in Britain right now” he said.

1 What is Covid Tracker Ireland?
2 High Court refuses Denis O’Brien application for discovery of documents
3 Holiday home rental company exits Irish market
4 Why gift a son now if it eats into his tax-free inheritance threshold?
5 Will family’s tax debt stop me getting my inheritance?
6 Copper Face Jacks pays out €45.95m in dividends to owner
7 SuperValu and Centra MD Martin Kelleher stepping down
8 US home prices to fall about 6.6% as Covid-19 hit deepens
9 Spar-owner BWG explores potential for online shopping ‘pot of gold’
10 Ireland’s economy set to shrink 8.5% due to pandemic
Real news has value SUBSCRIBE