US president tells Taoiseach: ‘We have so many people from Ireland in this country...I feel I know all of them’

U.S. President Donald Trump congratulated Taoiseach Leo Varadkar on Tuesday (June 27) for his 'great victory' in recent elections. "I just want to congratulate you. That was a great victory that you had," Trump said in a brief telephone call. 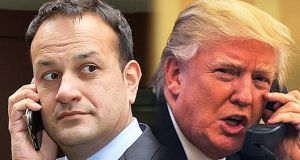 Taoiseach Leo Varadkar and US President Donald Trump spoke by telephone on Tuesday for the first time. Photograph: Julien Warnand/EPA

US president Donald Trump congratulated Taoiseach Leo Varadkar on his “great victory” during a phone call from the White House on Tuesday afternoon.

The pair discussed migration, Brexit, climate change and the undocumented Irish in their first conversation, during which Mr Trump referred to Mr Varadkar’s recent election as Fine Gael leader and appointment as Taoiseach.

Members of the media were present in the Oval Office for the beginning of the conversation and after a brief delay in connecting the call, which was played down by Mr Varadkar’s team, Mr Trump was heard greeting the Taoiseach.

“Hello how are you?...Congratulations on your great victory. We have so many people from Ireland in this country. I know so many of them too. I feel I know all of them. But I just want to congratulate you. That was a great victory that you had.”

The president made the unusual move of inviting RTÉ correspondent Caitriona Perry to say hello to Mr Varadkar.

“Promptly we were removed from the Oval Office so that the president and the Taoiseach could get on with the substance of the phonecall,” she told RTÉ radio afterwards.

Mr Trump invited Mr Varadkar to attend the annual St Patrick’s Day events in Washington next March, “and both leaders looked forward to meeting in person then”, according to a statement released from the Taoiseach’s office.

“Particular topics discussed included migration, Brexit and the movement of goods and citizens across the border, climate change, free trade, Irish inward investment in the US, and the undocumented Irish.

“They also discussed the Northern Ireland Peace Process.” The pair agreed to continue strong co-operation between Ireland and the US on economic issues, “shared culture and family ties”, the statement said.

In the Dáil earlier, Mr Varadkar had been urged to raise a range of issues with Mr Trump including LGBT rights and US foreign policy matters.

Separately, Mr Varadkar held a call with the British prime minister Theresa May in which they discussed the confidence and supply agreement between the Conservative Party and the DUP as well as the ongoing efforts to restore the Executive in Northern Ireland ahead of Thursday’s deadline.

A spokesperson for Number 10 Downing Street said Mrs May and Mr Varadkar spoke about their willingness to continue close cooperation as the UK embarks on leaving the European Union.

In the Dáil last week Mr Varadkar confirmed he would not rescind the invitation to visit Ireland extended to Mr Trump by former taoiseach Enda Kenny in March. However, he said no progress had been made in organising the visit and there was no timeline in place.

He was responding to a question from Green Party leader Eamon Ryan.

“I will not, of course, rescind that invitation. It would be inappropriate and create a diplomatic incident if I was to rescind an invitation once made but no progress has been made in organising such a visit, for which there is no timeline,” he said.