Social workers ‘retrained’ to manage risk instead of remove it 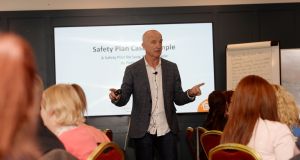 Andrew Turnell, an Australian child-protection expert who has pioneered an approach to child protection known as Signs of Safety. Photograph: Alan Betson / The Irish Times

Ireland could have the “best child protection services in the developed world” within five years, according to an international expert.

Dr Andrew Turnell, who in the 1990s pioneered a radical approach to child protection known as “Signs of Safety” in western Australia, is training all of Tusla’s 1,466 social workers in the model. Over the next two years almost all of the 3,640 staff at the child and family agency will be trained in the approach.

Adopted in 15 countries, including Canada, Sweden, Japan, parts of the UK, and several US states, the approach represents a “paradigm shift” in how Tusla will approach child protection, he says.

It will, he predicts, result in fewer children in care, social workers spending more time with families, empowered parents and safer children – as it has in other jurisdictions.

The strategy, adopted by Tusla 18 months ago, will go live in October, and take three years to embed throughout the agency. It will bring uniformity in the approach taken across an agency, which when founded in 2012 had 17 separate service areas, each with their own practice frameworks and approaches.

Central is a change in attitude to vulnerable families and their children, away from a paternalism where social workers see only the dangers and impose solutions – often moving swiftly to the “nuclear” option of removing children – to one where they see also the families’ strengths, build on these and work with the family to keep children safe.

At a Dublin training session last week, with about 100 child protection workers, Mr Turnell described focusing on what needs to happen in a family, rather than on what’s gone wrong. In too many jurisdictions – particularly in the UK – “social workers have been turned into social police,” he said, distrusted by families, including their children.

In the vast majority of vulnerable families, there was much that was good as well as bad, he said. The children would know this too and in the majority of cases removing them from what was good was extremely damaging.

He stressed talking to the children about what they like in their family, what they worry about and what they wish for, of bringing these to the parents and the family network, and planning together for the children’s safety.

“Child abuse, including neglect, is a syndrome of secrecy...If you want to build safety you need openness.”

He gives an example from his work in Australia. “The mother of three children has been binge-drinking for over 15 years. When she is sober everything is OK, she looks after them well, but every few weeks she goes on a massive bender, leaving the kids on their own.”

Social services became involved after one of the younger children burnt themselves seriously trying to cook. There were also concerns about strangers coming into the home when she was drinking.

Given that the mother has been drinking heavily since she was 13, sobriety was unlikely, at least in the short term.

The 11 year-old daughter was asked what she needed to feel safe when her mother went drinking. Using pictures and words, she told the social worker: “An adult to mind us, lots of food in the cupboards, no strangers in the house and mum answers her phone. If mum does this I will wake up feeling very happy.”

“This plan was taken to mum. There were tears, and we did not send her straight off to alcohol treatment. We said: ‘How can you prove to us and the kids that you are going to do this to keep them safe?”

Such plans, he said, are monitored, with a timeline within which, if it’s working, social services will “get out” of their lives. There are very few referrals using this approach, he says.

It is important to respect parents, to “honour” their strengths and empathise with their struggles, to achieve a good working relationship with them.

The strategy includes robust risk-assessment and analysis tools. “This approach is not naive. If nothing is changing or working in a family, get the children out, get them to permanency.”

Speaking to The Irish Times following the session, Dr Turnell echoes Tusla chief executive, Fred McBride, in a recent interview. He is critical of “simplistic notions”, particularly among media and political voices, that social services should be able to protect children from all risk.

“The Irish should be the last people to buy that nonsense. Life is risk. Sending your child to school is a risk. I am sure I could find risks in your family if I looked,” he says.

Demanding elimination of risk endangers children, he says, creating “risk- averse” social workers “terrified of getting anything ‘wrong’, hiding behind procedures and not trusting families”.

“If you want to grow, you take risks. Risk can lead to things being better. Positive risk empowers families. No family will be made perfect and of course; there will be failures.”

Stressing the maxim “it takes a village to raise a child”, he says social workers are too often expected to put right the consequences of poverty and society’s failure to support poorer families and their children. Internationally, poverty is a factor in more than 90 per cent of child neglect/protection cases.

He is optimistic for Ireland’s child protection services. Having trained child social workers in 15 countries, he says: “What’s fantastic about Ireland is you have not proceduralised yourselves to death. You’ve got real heart-and-soul social workers who care, who have incredible emotional intelligence, and you have staff retention rates other places, especially London, would die for.

“Ireland is so far ahead already. If it wants, Ireland could have the best child protection services in the developed world, within five years.”