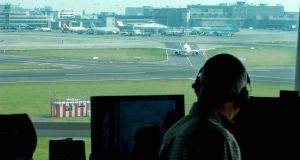 Figures show that total traffic in Irish airports during the first two months of the year was 4.18 million. Photograph: John Cogill/Bloomberg

New figures show that the number of people travelling through Irish airports grew in the opening months of the year.

More than 5.8 million passengers flew in and out of Dublin Airport in the first quarter, an increase of 260,000 or 5 per cent on the same period last year.

Separate figures from aviation news and database provider, Anna Aero, show that total traffic in Irish airports during the first two months of the year was 4.18 million.

Dublin Airport’s operator, State-owned DAA, said that a record 2.2 million people used the gateway in March, 2 per cent more than during the same month in 2016.

Meanwhile, the Irish Aviation Authority (IAA), responsible for air navigation and safety in the Republic, published figures showing that total traffic rose 3 per cent in March to 88,202 aircraft movements.

Along with that, the number of flights between Europe and North America that travelled through Irish airspace without landing here rose 5.6 per cent last month to 38,768.

The authority is responsible for guiding these flights safely through the Republic’s airspace and for a large part of their journey across the Atlantic.

IAA chief executive, Eamonn Brennan, noted that the Republic’s air traffic performance for last month was consistent with the rest of Europe.

“Preliminary data for March reported by ECAC [European Civil Aviation Conference area] indicates that average daily flights for all of Europe were up 4.3 per cent on March 2016,” he said.

DAA reported that the number of passengers flying between Dublin and north America was up 14 per cent in March 207,000.

The number of people who used the airport to connect to other destinations increased by 66 per cent to 51,000.

Anna Aero shows that 264,720 people travelled through Cork Airport in January and February while 190,601 used Shannon during the same two months.