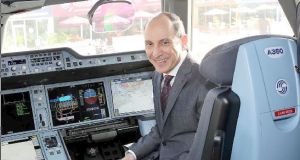 Chief executive of Qatar Airways Akbar al-Baker June, says measures such as the laptop ban are not necessarily “what the travelling public wants”.

The chief executive of a leading middle eastern airline says that terrorists targeted by the controversial laptop bans introduced in the US and UK will move to locations where there is less scrutiny of airline passengers.

Akbar al-Baker, chief executive of Qatar Airways, which will begin flying from Dublin to the Gulf emirate’s capital, Doha, in June, says in an interview with The Irish Times that measures such as the ban are not necessarily “what the travelling public wants”.

He argues that terrorists will simply go to airports where there are no bans. “And there are no bans in certain airports that are very risky – I don’t want to name them – but it is far easier to get on to aeroplanes from those places than it is with us,” he says.

Mr Baker says that the explosive trace detection test that is already a standard part of airport security provides a ready-made and near-foolproof alternative to the equipment ban.

“This is a 100 per cent solution,” he says. Qatar Airways subjects four out of every 10 passengers to this test before boarding.

The ban, introduced first by the US and then by the UK, bars those travelling from the countries involved from bringing any electronic equipment bigger than a smart phone on board aircraft.

The UK’s regulations do not apply to Qatar but the US department of homeland security ruling does extend to the emirate. The Republic has no such ban.

Qatar Airways is one of a group of Gulf airlines that have rapidly grown their share of the world’s long-haul travel market by offering flights through hubs that provide natural links between east and west.

The airline begins its Dublin-Doha service on June 12th and plans a formal launch in July. It will fly once a-day between the two capitals, a frequency that Mr Baker believes the market will absorb.

It owns 20 per cent of Aer Lingus’s parent, International Airlines Group, giving it an indirect interest in the Irish airline, along with Spanish players Iberia, Vueling and British Airways.

Mr Baker indicated his company could feed passengers to some Aer Lingus transatlantic services. “We will feed Qatari traffic where there isn’t a network that Qatar Airways serve,” he said.

Qatar will fly to more than 160 destinations by the end of the year. Mr Baker indicated that, along with Doha, the airline hoped to lure Irish travellers to flights to India, the Middle East, Far East, Africa and China.