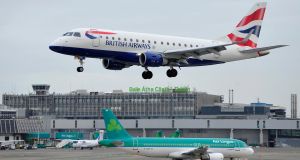 An Aer Lingus A320 Airbus. Each aircraft has a list price of about €86.5 million, bringing the Iranian order’s total value to more than €9.8 billion. Photograph: Photographer: Bloomberg

It appears that Irish aircraft lessor Avolon has been quick off the mark and visited Iran following the lifting of international sanctions.

The first thing that the Middle Eastern country did when the sanctions were lifted midway through January was to order 114 new Airbus A320s for its state-owned carrier Iran Air.

Each aircraft has a list price of about €86.5 million, bringing the order’s total value to more than €9.8 billion. Those calculations, of course, come with the caveat that manufacturers rarely charge the full list price for aircraft, but they at least give an idea of the deal’s scale.

One of the consequences of being an international pariah for decades is that Iran’s commercial fleet is sorely out of date. The sanctions imposed by Europe and the US meant it could not buy newly built aircraft.

According to some reports, part of the fleet pre-dates the Islamic Revolution there in 1979. If that is the case then it is almost virgin territory for aircraft suppliers. As a country of almost 80 million that is rebuilding trade links with the rest of the world, Iran will have to invest heavily in air transport.

Given the catching up that it has to do, industry analysts predicted last month that the Airbus order was the start of a potential bonanza. It looks like Avolon and its parent, Bohai, have already moved to stake a claim to a share of this.

Bohai is a Chinese company. Higgins did not say much else about the visit except to indicate that both Chinese and Irish business people are likely to be welcomed in Iran.

On that basis Avolon can probably expect to see a few of its rivals from the Irish aircraft leasing industry the next time it is in Tehran.