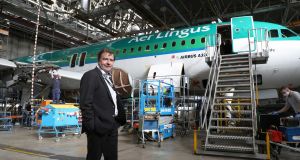 Businessman Conor McCarthy’s Emerald Airlines is poised to take over the Aer Lingus regional contract when it is renewed in two years’ time.

Aer Lingus sought bids in recent weeks to operate a new contract when the current deal with Stobart Air runs out in December 2022.

Emerald Airlines will enter exclusive talks with Aer Lingus to operate the regional service for 10 years after Stobart was ruled out of the race.

Mr McCarthy confirmed that Emerald Airlines would enter exclusive talks with Aer Lingus on the new regional services contract, which will run from January 2023.

“Emerald Airlines looks forward to these negotiations in the coming weeks with a view to concluding a binding contract and progressing with our ambitious plan to roll out a fleet of 15-plus ATR72 Aer Lingus-branded aircraft from Dublin, Belfast, Cork and Shannon,” he said.

Stobart Air confirmed to staff at the weekend that it has not been selected as the preferred bidder, but pledged to continue operating the regional services until its contract ends in December 2022.

“Our immediate aim is to maintain services in the short term, and to work hard to resuming normal operations in 2021 post the impact of Covid-19,” the airline told its workers.

The loss of the Aer Lingus contract will hit efforts by the airline’s majority owner UK-based Stobart Group, to find a buyer for the Irish carrier.

The transport and energy group put Stobart Air up for sale as it continued to lose cash in the face of the Republic’s tough Covid-19 travel restrictions.

Aer Lingus’s regional services link the Republic’s airports with provincial centres in Britain. Part of their role is to feed passengers into Aer Lingus’s transatlantic flights at Dublin.

Aer Lingus told Stobart management of its decision on Friday.

Mr McCarthy is the biggest shareholder in aircraft maintenance group Dublin Aerospace. Previously he was head of Aer Lingus’s commuter division, before working for Ryanair for a period.

He established Emerald Airlines earlier this year to bid for the Aer Lingus contract.