Are we allowed to travel home for Christmas or not? 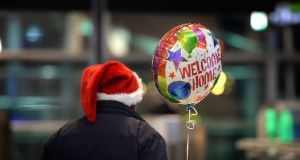 The Government is easing travel restrictions with an eye on some revival of aviation next year. Photograph: Dara Mac Dónaill

So, is Santa Claus coming to town or not? After the last 10 days or so, Irish people are wondering if they’ve been naughty or nice. Last week, chief medical officer Dr Tony Holohan warned politicians that international travel ahead of Christmas was not safe.

But then Minister for Transport Eamon Ryan said Christmas was back on. He announced that from this week, those arriving in the Republic from “orange” or medium-risk EU regions, could waive advice to self-isolate for two weeks, if they tested negative for coronavirus up to three days before travelling.

He then confirmed that from November 29th, those coming from high-risk red zones, or the United States and Canada, could waive their 14-day self isolation if they took a test here within five days of arrival. Ryan stressed that the Government favoured costlier, slower, PCR tests over faster, cheaper, antigen screening.

These measures are really a cautious version of the EU traffic light system for air travel, and represent relatively little progress towards reopening the Republic. Nevertheless, they appeared to signal an easing of restrictions on time for Christmas, when many families expect loved ones to return for a few days at least.

Tánaiste Leo Varadkar stepped in on Thursday, saying people should not book flights home for Christmas just yet. Holohan returned to the fray, advising Irish people not to travel home for the festive season. This was more explicit than his earlier statement, which he had hedged by pointing out that things could be different in late December.

Then on Friday, Taoiseach Micheál Martin signalled that the Government hoped to step overall restrictions down to Level 3, from their current Level 5, next month, with some further easing for Christmas. Those remarks were more general, and less related to travel.

The reality is that the Government is easing travel restrictions with an eye on some revival of aviation next year, while Holohan is more concerned with the immediate risk he believes large numbers of incoming passengers will pose. Still, you could forgive the rest of us for wondering whether Santa Claus, the Grinch, or both, with show up on Christmas Eve.