No technical solution for a soft Border post-Brexit, report finds 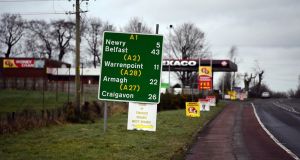 No technical solution to avoiding a hard border after Brexit have been found, according to a British report. Photograph: Bryan O’Brien/The Irish Times

Andrew Murrison MP was speaking ahead of the publication on Friday of a report on Brexit complied by the committee.

The report concludes there is no time to introduce invisible customs arrangements and also that there is “no evidence to suggest” that such a border arrangement is possible.

“We looked around the world but there are no examples of what is needed,” Mr Murrison told RTÉ’s Morning Ireland.

“There is no evidence that such a thing exists. The Swiss are working on a tech solution, but it could be years away. We need something that works now or at the end of the transition period.”

He said it was looking increasingly likely that a regulatory and tariff alignment solution would be required.

“The UK government is attempting to keep the border as it looks at present. That’s the goal, but we found no tech solution that would guarantee that. We’re running out of time.”

With Britain’s withdrawal from the EU due in just over a year, the committee said the UK may need to remain in or parallel to the Customs Union and Single Market throughout the two-year transition period.

British parliamentarians have urged Government to do more to clarify the rules, processes and technical measures that will allow the current frictionless North/South arrangements to continue.

They said ministers should develop an innovative system capable of delivering customs compliance without “ineffective and unworkable” physical infrastructure. The committee inquiry failed to find a technical solution anywhere else in the world capable of avoiding a hard border.

British foreign secretary Boris Johnson had suggested crossings of the frontier could be monitored by technology like travel between London boroughs.

Mr Murrison said: “It is now clear that a significant transition period is essential for the options in December’s Joint Report (EU-UK) to be worked though. “It is equally clear that regulatory and tariff alignment will be required during transition to avoid any hardening of the border before a definitive low-friction solution can be determined.”

The committee report, representing Conservatives, Democratic Unionists and Labour, said the negotiating timeline made it “challenging” to expect full implementation of a new non-visible customs regime by March next year.

It added: “We have seen no evidence to suggest that, right now, an invisible border is possible.”

The Committee heard “numerous” proposals for how the UK and the EU could ensure customs compliance without physical infrastructure, including mobile patrols, data sharing and enforcement measures away from the border.

“However, we have had no visibility of any technical solutions, anywhere in the world, beyond the aspirational, that would remove the need for physical infrastructure at the border. “We recommend the Government bring forward detailed proposals, without further delay, that set out how it will maintain an open and invisible border.

“These proposals should provide detail about how customs compliance will be enforced if there is regulatory and tariff divergence between the UK and Ireland.”

It said the British government should conduct an impact assessment for the Irish border each time regulatory or tariff divergence from the EU was proposed and regulatory exemptions may be sought. The report rejected any proposals for a customs border between Northern Ireland and the rest of the UK.

“This would create a costly barrier to trade with Northern Ireland’s largest market and would be incompatible with the spirit and intent of the Belfast/Good Friday Agreement.”

- Leaving the EU without a substantial agreement would have very negative consequences for avoiding a hard border.

- The Government should set out in detail how it proposes to manage immigration through internal controls, including whether there will be increased documentary checks to determine entitlement for residency and to access public services.

- Ministers should clarify how the Common Travel Area (CTA) protects the special status of British and Irish citizens in each other’s countries and potentially create new legal safeguards.

- The Government should detail its proposals for cross-border projects such as the Peace programme which supports community development. - PA

1 How can I view my dead brother’s will if I’m not the executor?
2 Investors pile into Irish property as turnover in build-to-rent sector reaches €2.54bn
3 Provisional liquidator appointed to Dublin engineering firm
4 Travel costs for IDA chief topped €45,137 last year
5 Facebook faces tax court trial in US over Irish offshore deal
6 Bursting of Tesla bubble a case of ‘not if, but when’
7 Aqua Dome in Tralee could close over insurance claims, directors warn
8 Legal row erupts over €85m contract
9 Kerry’s Chinese sales set for 30% hit from coronavirus
10 Mount Charles wins €10m catering contract at Maynooth University
Real news has value SUBSCRIBE