The bank guarantee, 10 years on: a shaken Lenihan faced the media 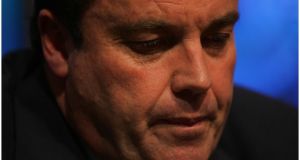 Former minister for finance, the late Brian Lenihan: explained the €440 billion guarantee was no bailout but necessary to maintain “the bloodstream of our banking system”. Photograph: Bryan O’Brien

It was another late night of filing copy in The Irish Times but that night was different, as the global financial crisis washed up on Irish shores. We knew something big was happening but we did not know what exactly.

Monday, September 29th, 2008, had been another brutal day for banks worldwide, and the contagion from the collapse of Wall Street bank Lehman Brothers two weeks earlier had finally pushed an Irish bank to the edge of default. Irish share prices suffered the biggest fall in a quarter of a century, and almost half the market value of Anglo Irish Bank, then the country’s third-largest bank, had been wiped out in trading that day.

This was not an alarm bell; this was the market holding up a giant megaphone and screaming: your banks are next.

Looking back, on the 10th anniversary this weekend, any one of the ground-moving events that day might have made the front page on its own, but the rescue of four banks in Europe and the United States, combined with the meltdown in Irish bank shares, turned the space below the masthead into blockbuster news.

“Government steps up plans to protect Irish banks,” was the subheadline below the next day’s lead headline about the late-night, breaking news that the US House of Representatives had rejected a $700 billion bailout for its country’s financial system. When the stock market opened the next day on the back of this, Irish share prices would, in the absence of any measure of support, continue heading in only one direction: down.

As then taoiseach Brian Cowen and minister for finance Brian Lenihan huddled with Government, Central Bank and Financial Regulator officials in Cowen’s private meeting room to consider emergency measures to halt the run at Anglo, journalists had heard that there were frantic discussions ongoing in response to the deepening crisis.

Sources close to the discussions had told us that a “systemic” solution requiring some form of Government support may have to be put in place. The front-page story, drafted very late, contained enough detail to signpost the announcement that would be made the next day.

Not long after 6.30am the following day, I was still asleep when I was roused by a call on my mobile phone. A young researcher on Newstalk’s breakfast show asked could I speak on the show about a guarantee that the Government had just announced for the Irish banks. I asked him to read out the statement as I scrolled for it on my phone.

I remember being struck initially by two things: that the Government had decided to act with such a bold attempt to staunch the crisis; and that the guarantee of almost all of the liabilities of the country’s six banks was so broad, covering debts far exceeding the State’s.

Within a few hours, Lenihan was in front of reporters explaining the €440 billion guarantee was no bailout but necessary to maintain “the bloodstream of our banking system”.

It is often not the words but other little things that you remember reporting in these kinds of moments. The collar on one side of Lenihan’s shirt was sticking up, poking up over his jacket. He looked shaken. The effects of a sleep-deprived night and the strain of selling such a decision to a disbelieving public for the first time were plain to see.

The collar on one side of Lenihan’s shirt was sticking up, poking up over his jacket. He looked shaken

That week was the start of an astonishing period to report on. Overnight, the vested interest of the State in the banks turned financial journalists into political reporters. The Department of Finance on Merrion Street became a daily call or stop on a reporter’s rounds, often involving complex briefings after markets had closed and cruelly close to the first evening newspaper deadlines. Caffeine became a firm friend.

There were upsides to those chaotic days. It was a fruitful time to be a reporter scrambling for morsels of information. Well-placed sources in their respective banking or government circles were often not well enough placed to know what was going on in the other, so sharing information with a reporter was helpful when survival was at stake. “What are you hearing?” was a question that was regularly asked on both sides.

Inevitably, there were raised voices. A feature article I wrote about Fianna Fáil’s ties to builders, almost all of whom were customers of Anglo Irish Bank, was published on the same day I was to interview Lenihan after the State became a shareholder in the bank.

Warned in advance he was not happy, I entered the minister’s meeting room to find a furious Lenihan leaning over a copy of the article heavily marked with lines and circles. He calmed down and at the end he was relaxed enough for me to ask how he was coping in the crisis.

“None of these fellas had to deal with what I have to deal with,” he replied, pointing to portraits of the 24 previous finance ministers, including Michael Collins and Charlie Haughey, on the walls around him.

Michael Fingleton’s own €1 million bonus paid after the Government guarantee or his €12,000 dental bill or his €11,500 retirement watch – paid for by that other radioactive lender Irish Nationwide (total cost: €5.4 billion) – were also useful proxies for the hubris that gripped the banks and the bankers that ran them.

A different kind of hubris gripped the individual in Anglo who one day decided to redirect calls to the bank’s main number to my mobile phone. Fielding a call from an angry depositor – “Put me through to Anglo in Galway; is this Anglo in Galway?” he asked – I felt I had well and truly fallen down a rabbit hole.

While the 10th anniversary is a time to reflect on those wild and, at times, funny moments in a time of crisis, the better reflection should be on the mistakes made, and decisions not made, that allowed the banks to become too big to fail. In retrospect, the crisis began long before that night in September 2008.