Zuckerberg has plenty to worry about after grilling by MEPs 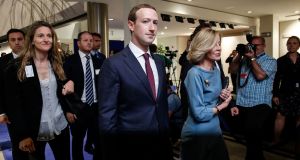 Mark Zuckerberg has long avoided going before the European Parliament to answer questions, and on Tuesday, it was easy to see why. European MEPs boldly went where members of the US Congress feared to tread, hammering the Facebook chief executive with weighty questions.

Zuckerberg seemed uncomfortable from the start, on edge in his opening address, which largely repeated points he’d made in his statement to the US congress last month. If – as happened in the US – he’d hoped to receive a few pointed but manageable questions tucked in among lots of bumbling ignorance about the company and the internet, he was swiftly disabused of that notion.

MEP after MEP laid into an increasingly stony-faced Zuckerberg, pelting him with incisive broad questions and needling on specifics.

What meaningful competition did the company have? Why shouldn’t Facebook be broken up into smaller platform companies (Facebook, WhatsApp, Instagram, Messenger)? What specific action were they taking on fake accounts, election interference, the bullying that has resulted in suicides, the fake news that in some countries threatens lives?

Would Facebook release advertising data from the Brexit and Irish referendums? Wasn’t Facebook committing daily privacy violations by sending data of non-Facebook-using EU citizens gathered in so-called “shadow profiling”, to the US? Does Facebook really support the incoming GDPR when it has moved the data of non-Europeans outside of Europe?

A format which initially seemed an advantage for Zuckerberg – allowing all the MEPs in the group to pose questions in succession, and then having Zuckerberg answer them at the very end – turned out to be a major liability.

Okay, so we didn’t get any meaningful answers or new information. And it was obvious that company strategy was to have Zuckerberg group questions under prepared broad topic headings to which he had rehearsed talking point answers.

But the overall optics were of a stunned CEO facing a slowly building tsunami of hard questions.

And at the end, which Zuckerberg attempted to hasten, MEPs were having none of his avoidance tactic of promising his people would come back to individuals with more detailed answers.

Oh no. The MEPs got delightfully stroppy. Unwilling to let the session politely close, they started to shout out to have questions addressed. Parliament president Antonio Tajani finally ended the session with a commitment to get some answers in writing, but not before some MEPs mentioned perhaps it was time to refer Facebook to the EU’s antitrust division.

Facebook will not have drawn a single ounce of comfort from the Europeans, and will go away with plenty to worry about.

1 Basic income for all: Has the Covid crisis given us a new economic model?
2 ‘I don’t need to do any of this. . .I don’t actually need to work.’
3 Promontoria barred from pursuing doctor over Ulster Bank loan
4 Only way is up for Stripe as valuation skyrockets
5 Admission of mistake in Oxford vaccine dose raises doubts over reliability
Real news has value SUBSCRIBE