Zuckerberg hails Ireland as proof of Facebook’s commitment to EU 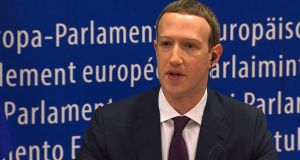 Facebook CEO Mark Zuckerberg at the European Parliament in Brussels: “We didn’t take a broad enough view of our responsibilities.” Photograph: AFP/Getty Images

Facebook’s Irish HQ is a testament to the company’s commitment to Europe where it will employ 10,000 people by the end of 2018 – up from 7,000 today, a conciliatory Mark Zuckerberg told MEPs on Tuesday in Brussels.

He admitted, however, that Facebook had not done enough to prevent the social network from being used for harm, and apologised.

The Facebook founder and chief executive was live-streamed testifying to party leaders of the European Parliament where he faced a grilling over the company allowing its data on 87 million subscribers – including up to 2.7 million in the European Union – to be mined and used by the now defunct Cambridge Analytica.

“Whether it’s fake news, foreign interference in elections or developers misusing people’s information, we didn’t take a broad enough view of our responsibilities,” Mr Zuckerberg said. “That was a mistake, and I’m sorry.”

He spoke within three days of the coming into force of powerful new EU legislation to protect data privacy, the General Data Protection Regulation (GDPR). They give regulators the power to fine companies up to 4 per cent of global revenue for violations – equivalent to $1.6 billion in Facebook’s case.

Mr Zuckerberg insisted the company is deeply committed to Europe. “Many of the values Europeans care most deeply about are values we share: from the importance of human rights and the need for community to a love of technology, with all the potential it brings,” he said.

He pledged that GDPR would be implemented from the time of its introduction “in three days’ time”, and that it would be the basis for the company’s approach all over the world.

But, in responding to questions, he did not address Facebook’s decision to move data stored on 1.5 billion non-EU subscribers out of the EU – specifically from Ireland – so that they would not be affected by the new regulations.

He set out details of new measures the company is taking to ensure that another Cambridge Analytica scandal does not happen.

He rejected claims from two right-wing leaders that Facebook’s algorithms were ideologically driven. “Facebook is a neutral political platform,” he said.

Diane Dodds of the DUP spoke of the need to address online bullying and spoke of the death of a child as a result of online blackmail.

On the need for regulation of social media, he said the question is “what is the right regulation?” Some sort of regulation is “inevitable... it’s about getting it right”.

Mr Zuckerberg’s “apologies are not enough. We will be looking for further commitments,” European Parliament president Antonio Tajani said after the meeting.