Communications firm vying to convince other US states to follow suit 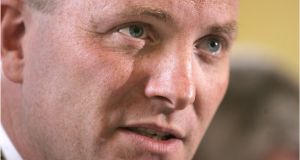 Rivada Networks, a communications company owned by Galway businessman Declan Ganley, has achieved a major breakthrough in its attempts to wrest a slice of a huge US federal telecommunications contract from its rival AT&T.

The state of New Hampshire has this week opted out of the Firstnet federal contract to build a new network for US emergency services – which AT&T won this year ahead of Rivada – and has instead asked Mr Ganley’s company to build an alternative.

It is the first state to formally opt out of Firstnet ahead of a December 28th deadline, and Rivada is now vying to convince other states to follow suit.

Colorado has already provisionally chosen a joint venture of Rivada and its partner Macquarie Capital to build it an alternative to Firstnet, although it has not yet formally opted out.

Other states believed to still be in play ahead of the deadline for opting out include North Carolina, Connecticut, Georgia, Massachusetts and Mississippi.

The federal contract to build the infrastructure for Firstnet nationwide will involve capital expenditure of at least $40 billion, including a direct US federal subsidy of about $6.5 billion. New Hampshire alone is still in line for a subsidy of up to $30 million, in an opt-out scenario.

The real commercial value for the Firstnet contract winner, however, comes from the utilisation of the spectrum for other commercial activities whenever the network is not needed by emergency services.

Rivada holds a significant number of patents to deploy technological solutions designed to facilitate “open access” wholesaling of such a network, although the use would automatically defer to the emergency services once it is needed.

Rivada still has three hoops to jump through before it is finally selected to build the New Hampshire alternative to AT&T.

Firstly, its plan must go to the Federal Communications Commission for approval. It must then get approval from a second US agency, before Rivada will, finally, have to strike a spectrum leasing deal for New Hampshire from Firstnet.

“We look forward to other states joining New Hampshire in building their own [networks] between now and December 28th,” said Mr Ganley.

“Rivada and its partners are ready to work with Firstnet and the states to roll out [alternative networks] in any state that opts to follow this bottom-up approach.”

Mr Ganley promised Pennsylvania that if it ditched Firstnet and selected Rivada his company would create 6,000 jobs in the state, directly and indirectly.

The two former state governors, who sit in Rivada’s board, wrote to a US congress committee last month to outline some of Rivada’s offering.