Declan Ganley firm in legal action against US government 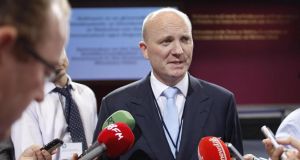 Declan Ganley: Rivada Mercury lodged a claim with a US court asking it to declare that excluding it was “arbitrary and capricious”. Photograph: Julien Behal/PA Wire

A consortium led by Declan Ganley’s Rivada Networks is taking legal action against the US government in an effort to stay in the race for a federal telecoms contract potentially worth billions of dollars.

The US department of the interior recently eliminated a bid by consortium Rivada Mercury, made up of the Irish man’s company and four partners, to build a national emergency services broadband network, and opened talks on a deal with telecoms giant AT&T.

Rivada Mercury has lodged a claim with a US court asking it to declare that excluding the partnership was “arbitrary and capricious” and to bar the government from awarding the contract without first negotiating with the consortium in line with federal procurement rules.

The US’s federal claims court, which handles lawsuits against the US government, will hear the case in February and rule on it around March 15th. The department of the interior has agreed to suspend talks with AT&T in the meantime.

According to Rivada spokesman Brian Carney, the consortium will submit its claim this month and the government will respond in January, ahead of the scheduled hearing in February. He said the department of the interior cannot make any decision on awarding the contract before March’s ruling.

“We believe that the government decision to enter into negotiations with one party was misguided and contrary to procurement laws,” Mr Carney said.

The contract for the nationwide public safety broadband network (NPSBN) potentially involves billions of dollars. Under a long-standing pledge, the federal government wants to provide a communications network to local emergency services such as police, firefighters and ambulance that will stretch across the US.

The government will contribute $6.5 billion to the winning bidder and allocate the company 20 megahertz of radio spectrum, which could be worth about $15 billion on the basis of recent auctions of these resources in the US.

Along with providing for the emergency services, the winning bidder can put its share of the US radio spectrum to a secondary commercial use, which should in theory contribute to the cost of operating the network and allow it to earn a profit.

Rivada has recruited US equipment manufacturing giant Harris Corporation, Nokia, Fujitsu and network and infrastructure building specialist Black & Veatch as partners. Each holds 20 per cent of the consortium.

Rivada recently took legal action in Mexico to be readmitted to a competition to build a $7 billion mobile network for the state.

1 ‘I’m so lucky to be in the Caribbean – a million miles from Derry Girls’
2 Michael Smurfit: ‘I asked Trump to invite me to the White House for my 80th birthday’
3 Small businesses are cannon fodder in zealous anti-virus experiment
4 EU has helped transform living standards of Europe’s people
5 Household savings soar as consumers stop spending
Real news has value SUBSCRIBE