Will the Irish contact-tracing app ever materialise? 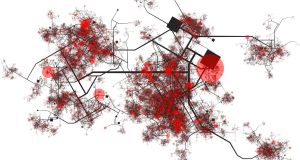 Technology may seem like a saviour in these pandemic times, but is it falling short? Photograph: iStock

Technology may seem like a saviour in these pandemic times, but is it falling short? After initial pledges to have an Irish contact-tracing app for coronavirus out in 10 days – an unrealistic time frame for such a project, we can all admit – it seems as if the promised app will never materialise.

Understood to be undergoing testing, the app is designed to help the health authorities track down those who have come into contact with coronavirus patients. While the traditional contact-tracing operation will remain at work, the technology option may help track down strangers who have been put at risk.

But will it? New research from Trinity College Dublin indicates that the Bluetooth technology being used by these contact-tracing apps may be less accurate than initially thought. This issue may be particularly pronounced on public transport, where the amount of metal can amplify radio signals and make it seem as if people were closer than they actually were.

That could mean a lot of people being tested unnecessarily for the virus. And even if you were of a mind to ignore the cost of the tests, there is the fear that people could have to needlessly isolate themselves, perhaps imposing a financial burden on their families.

The research also examined the Google and Apple exposure notification API (application programming interface) on which the apps are based, and found the way the API measures Bluetooth LE signal strength, probably to save on battery power, can make it inaccurate at estimating proximity.

And there’s another thing to consider. According to the study, updates to the API can be pushed out silently to handsets by Google, without notifying users or giving them the chance to opt out.

The UK, it appears, thinks it has the answer. After shunning Google and Apple’s technology initially, the government there has had to perform a somewhat embarrassing climbdown because it turns out its own app doesn’t work all that well. So now it’s back to the drawing board, and according to health minister Matt Hancock the Google-Apple system would benefit from work done on the abortive NHS app.

So after holding out for weeks, could the NHS app actually help solve some of the problems the Trinity research has highlighted? We’ll have to wait and see. Although past experience has taught us it’s better not to hold our collective breath.