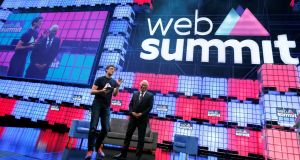 The Web Summit kicked off its opening ceremony in Lisbon, but the event didn’t go without a hitch.

While 3,000 people stood outside the MEO Arena watching the opening ceremony on screens, co-founder and chief executive Paddy Cosgrave attempted a Facebook Live demo on stage. He had to abandon the plan, however, after it became obvious that the wifi wasn’t working. A second demo later in the night proved more successful.

Infrastructure was among the reasons given for the Web Summit’s move to Lisbon, with wifi a particularly contentious issue in its final years in Dublin.

Crowds had gathered for the opening ceremony, which had a billed starting time of 6pm. By the time the event finally kicked off 30 minutes later, people were restless.

The summit opened with a video proclaiming the reasons why organisers fell in love with Portugal – startups, skateboarding, golf and general scenery all featured in the short homage to the city – before Mr Cosgrave took to the stage. Earlier in the day he was presented with the key to the city of Lisbon.

“This is crazy. I remember six years ago when we started Web Summit, just under 40 people showed up. We now have more than 53,000 people from 167 countries around the world,” he said.

“There’s something truly unique happening in Lisbon right now and we’re so so happy to be here.”

Then came that demo, which he quickly moved on from, promising to return to it later. Portuguese prime minister Antonio Costa joined him on stage to deliver the first speech of the event. Mr Costa said he hoped that attendees would take away with them the perception that Portugal is a “dynamic, progressive open to business country”.

“During the next few days Lisbon will be the world capital of entrepreneurship,” he said.

He gave way to a panel on the new realities of our world, from Brexit and trade to international co-operation, which featured former European Commission president José Manuel Barroso, Mogens Lykketoft from the United Nations, and Roberto Azevedo.

American actor and film-maker Joseph Gordon-Levitt was the big name speaker of the night, heading to the Web Summit to talk about his company Hitrecord. The company is an online production company, facilitating collaboration and paying its artists. It was started by the actor and his brother in 2009, when Gordon-Levitt was at a lull in his career, and had taken a break from acting to go back to school.

“When Hitrecord started, my schedule wasn’t very busy, and I didn’t think of it as a company,” he said. “Slowly a community started to form, from there it was always a back and forth between us and the community.”

The company has now paid more than $2 million to artists, with collaboration still the main theme.

“Working together is a big part of it I find a lot of what’s online is about ‘me’,” he said. “Everything is designed to facilitate collaboration, not just showing off their own stuff.”

The Web Summit will continue until November 10th.

1 Anti-alcohol zeal of public health experts peppers reopening debate
2 ‘I don’t need to do any of this. . .I don’t actually need to work.’
3 Admission of mistake in Oxford vaccine dose raises doubts over reliability
4 Same Brexit stumbling blocks persist as Barnier travels to London
5 White knights or loan book cannibals – what will happen at Ulster Bank?
Real news has value SUBSCRIBE