SodaStream Jet Megapack – Is there life in the 1980s classic?

The fizz machine now claims the loftier purpose of saving the planet. We tested it 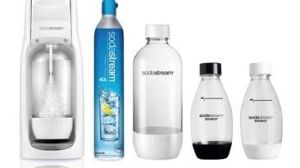 It’s a simple idea: fill up the bottle, pop it in the soda stream and then carbonate the water

If your last experience with SodaStream was in the 1980s, you should know that things have changed.

It is no longer the kitsch kitchen appliance and has a new, worthier purpose: saving the planet. The company is pitching itself as another way to fight the war on plastic. Instead of buying bottles of carbonated water – usually plastic – you can fizz up some of the very finest tap water and use that instead. No plastic bottle, no environmental guilt.

The SodaStream Jet is a simple affair: white plastic that feels sturdy enough. The mega pack includes one 1l bottle and two 500ml bottles, plus the gas canister.

It’s a simple idea: fill up the bottle, pop it in the soda stream and then carbonate the water. After that, you can either leave it as it is or add syrup to turn your water into fizzy orange, cola or whatever else grabs your fancy. It’s fairly easy, and you can control the level of fizz by pressing the button more times (or fewer, if you prefer moderate bubbles).

I’ll admit, I’m not the biggest fan of sparkling water, regardless of its origin. If there was nothing else available, I’d drink it; I’d rather avoid it, though, because it tastes strange to me.

So having established I’m not an expert, I called in one. Irish Times Innovation Editor Michael McAleer is the office sparkling water aficionado, so when he said he would be able to tell San Pellegrino from SodaStream, I decided to put him to the test.

Four glasses, four different sparkling waters: Ballygowan, Tipperary, San Pellegrino and SodaStream. The first attempt he picked out the SodaStream instantly, mainly because I’d under-gassed it. We won’t make any comment on the fact that he failed to pick out the San Pellegrino, however.

So we tried again. The second attempt was also a dead giveaway because I went too far in the other direction; the SodaStream water was the fizziest of the lot. Third time, he still picked out the SodaStream because, he said, you could taste it was tap water.

And there’s the rub: your tap water will determine how the sparkling water tastes. Personally, I’m not picky; I’ll happily drink tap water over bottled because I’m not entirely convinced some bottled waters aren’t coming from the same source anyway. But I’m not adding carbonation to it, which may make all the difference.

The good
If you are interested in cutting out plastic waste, the SodaStream might help you with that. You want fizzy water, you got fizzy water, with only the reusable SodaStream bottle contributing to plastic.

The not so good
If you aren’t a fan of your tap water, carbonating it won’t make it taste any nicer. However, you can probably throw some of the syrups in there if you just fancy a fizzy drink.

The rest
The SodaStream came with a note about its factories in Israel. The company was subject to a boycott a couple of years ago because it had a factory within the Palestinian West Bank; in 2015, production was moved to Lehavim in southern Israel.

The verdict
Depending on your tap water – and your palate – SodaStream could help you cut down on plastic.