Datalex in danger of falling under Dermot Desmond’s control 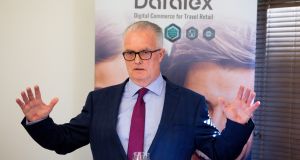 Businessman Dermot Desmond may end up taking control of Datalex if the beleaguered travel retail software group fails to meet a set of strict sales, earnings and cash targets that he has tied to making additional emergency loans available to the business.

Datalex, which secured €6.14 million of high-cost loans from Mr Desmond’s Tireragh to keep it afloat after being engulfed by an accounting scandal earlier this year, is currently in the process of increasing the facility to €11.3 million.

Details of the new agreement, contained in a shareholder circular posted on Datalex’s website ahead of an extraordinary general meeting next week, show that Tireragh has been granted additional security over group assets and tighter conditions that could see the software business fall under Mr Desmond’s control if they are breached.

Datalex will be deemed to be in default if its revenue or earnings are at least 20 per cent below forecasts, or if its net working capital is less than 80 per cent of projected figures, for two months in a row, according to the circular.

In addition, the agreement states that Datalex will be in default if Tireragh is of “the reasonable opinion” that an event or circumstance “has or is reasonably likely to have a material adverse effect” on its business or prospects.

Tireragh may call on all of the borrowings to be repaid immediately if a default event has occurred. If Datalex does not have the money to pay back the debt, the security granted by the company over its Irish, US and UK units “might be enforced, which could involve the transfer of the group’s business and operations to Tireragh or at its direction”, the document says. Mr Desmond owns 29.9 per cent of Datalex.

These strict conditions were not contained to the original loan agreement, approved by shareholders in April. They serve to pile pressure on Datalex’s new management team to refinance the loans as soon as possible through an equity raise. The borrowings must be repaid by November 1st, 2020.

Datalex’s board, led by interim chairman and chief executive Sean Corkery, warned in the circular that if shareholders do not back the new loan agreement, the company’s “ability to continue to trade could be placed in significant doubt”.

Datalex first alerted the market of suspected accounting irregularities in January, sending its shares tumbling. It subsequently confirmed that revenues and earnings for the first half of last year had been overstated.

Most of Datalex’s accounting issues relate to its booking of service revenue on a project to overhaul German airline Lufthansa’s digital commerce offering, which had gone way over budget and missed key deadlines. Lufthansa moved in September to terminate the contract, though Datalex disputes the legality of this and remains in talks with the German carrier.

Datalex shares were suspended in Dublin in May as it failed to publish its 2018 results by a regulatory deadline. The results, finally published in early September, showed it made a net loss of $50 million (€44.8 million).

In a highly unusual move, its external auditor EY refused to give an audit opinion, due to the breakdown in controls and accounting irregularities.

While Datalex intends to raise equity to refinance Mr Desmond’s funding, it warned that it may be difficult to do this as long as the shares are suspended. The lack of a signed-off auditor’s report is making it more difficult for share trading to resume.