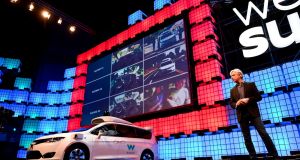 Google subsidiary Waymo has started test-driving self-driving cars without anyone in the driver seat on public roads.

The company’s chief executive, John Krafolk, disclosed the news while appearing at the Web Summit in Lisbon.

“To date, Waymo vehicles have been operating on public roads with a test driver at the wheel. Now, in an area of the Phoenix metro region, a subset of our fleet will operate in fully autonomous mode, with Waymo as the sole driver,” said Mr Krafolk.

“Over time, we’ll cover a region that’s larger than the size of Greater London, and we’ll add more vehicles as we grow,” he added.

Mr Krafolk also said that Waymo, which began life as a Google project in 2009, will launch a ride-hailing service with no human behind the wheel soon.

Members of the public will be able to start riding in the company’s fleet of Fiat Chrysler Pacifica minivans without human drivers in a test run of the ride-hailing service in the next few months in certain areas of Arizona.

Initially, passengers will be accompanied in the back seat by a Waymo employee although over time they will be allowed to ride by themselves.

The company did not say when it expected to roll out the ride-hailing service on a greater scale.

Mr Krafolk said that 94 per cent of car crashes in the US are due in some part to human error and that most vehicles lay idle 95 per cent of the time.

“We want to create a driver that never gets drunk, never gets tired and never gets distracted. That’s why our goal is to build the world’s most experienced driver who can take anyone, or anything, safely from point A to point B,” he said.

Waymo vehicles have driven more than 3.5 million autonomous miles on public roads across 20 US cities since 2009.

“Because you’re accessing vehicles rather than owning them, in the future you could have access to an entire fleet of vehicle choices that are tailored to each trip you want to make,” he said.

“You can reimagine the very idea of what a vehicle is. Because they no longer have to be designed around the driver as the primary user, they can be designed for specific purposes and tasks that better suit our needs as riders and users,” Mr Krafolk added.