‘We’ll get back to you’: six questions Mark Zuckerberg dodged 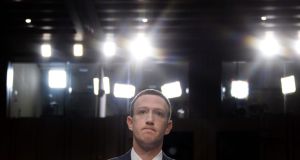 Mark Zuckerberg: variations of “my team will get back to you” provided a constant refrain. Photograph: AFP/Getty

Mark Zuckerberg survived another five hours of quizzing by members of the United States Congress on Wednesday – but not without dodging some questions on Facebook’s data practices.

Variations of “my team will get back to you” provided a constant refrain whenever the social network’s chief was pressed for details on its harvesting and use of personal data.

Here are the questions he could not – or would not – answer fully.

Is Facebook itself limiting the amount of data it collects on users? Will you commit to minimise the collection of personal data?

One lawmaker realised the changes Facebook had promised since the Cambridge Analytica revelations were focused on third-party developers. When he pushed for an answer on whether the social group itself restricted the amount or type of information it collected, Mr Zuckerberg replied: “Congressman, yes. We limit a lot of the data that we collect and use.” But he provided no details and may simply have meant Facebook does not collect everything it can.

The congressman also tried to pin Mr Zuckerberg down on a question that gets to the heart of Facebook’s future: “Yes or no: will you commit to changing all user default settings to minimise, to the greatest extent possible, the collection and use of users’ data?” Such a move would severely hamper Facebook’s business model, which relies on advertisers targeting specific groups, but Mr Zuckerberg did not point this out, merely saying: “Congressman, this is a complex issue that I think deserves more than a one-word answer.”

Facebook tracks users when they are browsing other sites even if they have logged out of the service. On Tuesday Mr Zuckerberg leaned heavily on the idea that this was for “security” reasons. But on Wednesday he admitted the company collected the information for targeted advertising.

In response to a third follow-up question asking whether data mined for security purposes was also used to sell advertising, Mr Zuckerberg ended up saying he believed it was separate data – but that he would follow up with details. He also said Facebook could not track activity in other apps – but the social network’s virtual-private-network service, Onavo, deliberately tracks user activity across apps.

One congresswoman became angry at Mr Zuckerberg’s apparent lack of knowledge on the use of Like buttons and “invisible pixels” that appear on other sites and send information back to Facebook. When asked how many Facebook Like buttons there were across the internet, he could not give a current figure but said he suspected there were at one point at least 100 million. After Mr Zuckerberg once again promised to “get back” to his questioners, the congresswoman pressed him to commit to answering within 72 hours.

Mr Zuckerberg was also asked if Facebook tracked commercial transactions when users did not explicitly share them. After he said it did not, Ashkan Soltani, former chief technology officer at the Federal Trade Commission, took to Twitter to point out that Facebook’s own developer guide says developers can use the Facebook pixel to “track in-page actions, such as product purchases”.

Can users see the data Facebook collects when tracking them around the web?

Asked whether users truly owned their Facebook data, Mr Zuckerberg has frequently pointed to their ability to download their own data. When one congressman said his staff had downloaded their data and found no list of the websites Facebook had tracked them visiting, Mr Zuckerberg insisted each users’ information was there.

But after the break, and consulting his advisers, he corrected the record, saying Facebook did not keep this browsing data for long but used it to create a list of each user’s interests, which the user could access.

Although not asked directly, the question of what Facebook’s algorithms do with the raw data hung over the hearings. Mr Zuckerberg was keen to discuss the data users choose to put on Facebook – posts and photographs and biographical information. But researchers, including those at Cambridge Analytica, have spoken of the inferences that can be drawn from such data about a person and their proclivities to buy a product or support a candidate.

Some of this is done in-house. For example, Facebook allows marketers to upload their own email lists and search for “lookalike audiences”. Privacy International, an activist organisation, said there were still “serious questions” about Facebook’s approach to privacy, especially as machine learning creates new ways of using data to predict outcomes. “Facebook likes to talk about privacy settings, and people’s control over the content they put on the platform. But Facebook doesn’t like to talk about how exactly this data can be used to profile and target people,” it said in a blog post.

How many data points does Facebook have on nonusers, and does it compile shadow profiles?

Even if you have never been on Facebook, the company may have data on you. One congressman raised the issue of “shadow profiles”, where Facebook mines, for example, contact books to show who is connected. Mr Zuckerberg stretched credulity by saying he was “not familiar” with the term. He did, however, say such data was collected for “security purposes”.

The lawmaker then asked how much information was in these profiles, pointing out that people should not have to sign up to Facebook to see what data the company held on them. Mr Zuckerberg replied: “Congressman, I do not know off the top of my head. But I can have our team get back to you afterward.” – © The Financial Times Ltd 2018

4 ‘Unlike other places in the US, you can actually afford to live here’