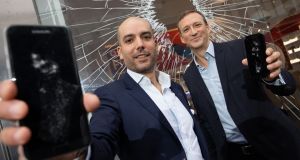 Customers will get their phones back within two hours, and the repairs include a one-year Vodafone guarantee. Vodafone is the first network in Ireland to offer this type of service.

Research carried out by the telecoms groups found that as many as four out of 10 mobile users have damaged their handsets over the past 12 months. But most are not fixing their devices. High costs, poor quality or long repair times were cited as reasons.

The survey also found that 87 per cent of people don’t have insurance cover for their phones.

Vodafone will charge between €69 and €265 for issues like screen replacement depending on the model of the phone. Software repairs will cost from €30.

To launch Fix&Go a free repair service will be available to customers turning up at Vodafone’s Grafton Street, Dublin, or Patrick’s Street, Cork, outlets between noon and 3pm on Friday.

These will be the only stores offering the service initially, but Vodafone expects to roll it out across other stores in its network over the next few months.

5 Nintendo readies new Switch as it battles next gen consoles