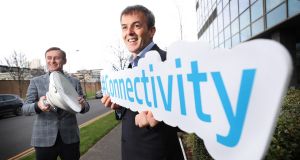 Viatel has made its second acquisition in less than three months with a deal to buy Irish Telecoms Services for an undisclosed sum.

The deal, which comes hot on the heels of the acquisition of rival Ripplecom in mid-October, sees Viatel buying the managed connectivity company, which two years ago joined with Exigent Networks and Netforce to form Paradyn.

With Paradyn increasingly focused on end-to-end IT security and managed services, the decision was recently made to sell off Irish Telecom.

With offices in Dublin and Cork, the company, which trades as Irish Telecom, has been delivering high speed, high performance radio and fibre networks for over eleven years. Its customers include Folens Publishers, Irish Continental and Booking. com, along with a number of credit unions and public sector organisations.

The Viatel group, which also includes Digiweb, provides connectivity, cloud and security solutions to businesses and has its own data centre facility in Blanchardstown, Dublin.

It said the latest acquisitions means that it now serves almost 4,000 businesses across the Repulbic and also has 28,000 residential customers.