Nokia 7 Plus: budget smartphone is a lean, keen snapping machine

Tech Review: this Android One phone takes decent photos – but please, no ‘bothies’ 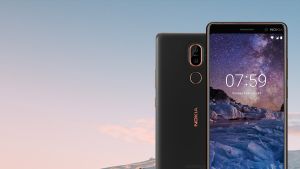 Remember when Nokia decided to throw its lot in with Microsoft’s Windows Phone software rather than go for Android? That didn’t work too well. Nokia sold its phone division to Microsoft, and the Nokia brand is now used by HMD Global, which is churning out a combination of Android-powered smartphones and updated feature phones from the Nokia archives.

The Nokia 7 Plus is just one of these handsets. The handset is pitching firmly at the middle market, with a price of €399, but trying to raise its game with a great camera, above-average battery life and a design that wouldn’t look out of place among more expensive handsets.

The 7 Plus comes with a six-inch 18:9 full HD+ display. It’s big, bright and perfect for everything from web browsing and emails to editing videos or framing photographs expertly. It’s not quite at the level of Amoled or Super Amoled displays, but it doesn’t feel like a cheap compromise.

On the inside, it has a Snapdragon 660 chip, 4GB of RAM and 64GB of storage. That doesn’t put it top of the pile for power, but it is more than capable of handling most tasks without stuttering.

The Nokia 7 Plus uses Android One, an unmodified version of the operating system. That means no bloated add-ons to deal with, and it is considered more secure because regular security updates come from Google. So it’s cleaner, more secure and runs just as well – if not better – than the customised Android versions on other manufacturers’ phones because there is nothing in the background eating up your phone’s battery life. What’s not to like?

That’s not to say the entire experience is problem-free. You don’t have the bloatware, but you also don’t get additional apps that sometimes find their way to your phone, such as camera apps. It’s a personal preference, but occasionally those apps are better than the stock version. Nokia does put its own camera app on there for 4K shooting, so that should keep people happy.

There were one or two incidences of apps shutting down without warning, but it wasn’t regular enough to cause a problem or form a pattern.

Part of the selling point of the 7 Plus is its camera, and while it’s not quite at the level of the Huawei P20 Pro, it certainly delivers decent photographs. The camera comes with a 12-megapixel wide-angle lens, and a second 13-megapixel sensor that has an optical zoom to get you closer to the action. It’s becoming almost a standard feature on camera phones to have a dual camera, so it’s nice to see it on a more budget-friendly option and for it to work.

A Pro mode gives you full control over settings, if you feel up to taking over responsibility for white balance, focus, shutter speed and exposure.

For the most part, the camera worked well. When put into extreme conditions – bright, sunny days, low light – that’s when it starts to struggle a little. It’s not alone here, though, and you’ll have to make the decision if the far lower price is worth taking the hit on a small number of photos you’ll take on the camera.

One thing, though: Nokia, stop trying to make “bothies” happen. It’s right up there with “groufies” – which Huawei apparently trademarked in 2014 – in terms of made-up words that need to go far away and never come back. Ever. it’s basically a mode in Nokia’s front-facing camera that uses both front- and rear-facing cameras at once to create a split-screen photo. It’s a novel idea, but please, leave the nicknames out of it.

The good
For its price, the Nokia 7 Plus is a good bet. It delivers on style, performance and camera features without slapping a horribly expensive price tag on it.

The not-so-good
Compared to other phones currently on the market, the Nokia 7 Plus doesn’t have the fastest chip or the highest-quality screen - but that’s reflected in the price. Also: please, ditch “bothies” as a term.

The rest
Android One isn’t perfect, but if you want something a little cleaner and a lot less bloated than the Android foisted on us by other manufacturers, I’ll take a little bit of instability every now and again.

The verdict
Budget phone that punches above its weight. Nokia may not be king of the smartphones anymore, but it’s certainly serious about staging a comeback.