Yes, your teenagers are all on Snapchat 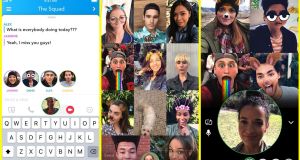 Snapchat use has jumped from 41 to 69 per cent, according to the Pew Research Centre for Internet & Technology.

We’ve known for a while now that teens weren’t that into Facebook but this has plummeted from 71 per cent in 2014/2015 to 51 per cent in 2018 while Snapchat use has jumped from 41 to 69 per cent according to the Pew Research Centre for Internet & Technology. To underline this exodus, only 10 per cent say Facebook is the social media app they use most often.

Based on more than 1,000 interviews with parents and more than 700 interviews with teens in the US, Pew found that while Snapchat is growing in popularity and is used most often, YouTube is still the most widely used social media platform among those aged 13-17. Instagram also attracts the teen market: the majority – 72 per cent – use the Facebook-owned platform.

And for all of us languishing in our 30s and believing that Twitter is where it’s at– it’s not. At least not for teens. Only 32 per cent say they use it and a meagre 3 per cent claim it as their most frequently used social media app.

1 Stripe moves payment processing to Dublin due to Brexit
2 Dublin Airport says pre-flight Covid tests possible ‘within days’
3 How long can Government afford to keep State pension age at 66?
4 How much state pension will I get next year?
5 Big night for Big Tech as Apple, Google, Amazon and Facebook post strong results
Real news has value SUBSCRIBE