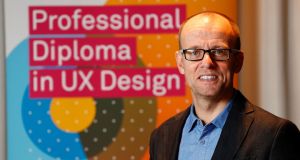 The UX Design Institute increased its revenues in 2019, doubling to €2.67 million as it expanded into new markets and increased the number of students taking its courses.

The company said there was steady growth in the UK, Germany, Switzerland and South Africa, with 73 per cent of students enrolled in its Professional Diploma in UX Design course now coming from outside Ireland. The company says the course is the world’s only university credit-rated online UX course, running over a six-month period.

The UX Design Institute, which was set up by Colman Walsh in 2013, is set for further expansion, with plans to increase its staff in 2020 and add new roles in its product and marketing teams. This follows from last year’s growth, which saw 10 new roles created.

“2019 was a great year for the company with the business growing significantly,” said Mr Walsh. “Behind all of this is a surge in demand for UX skills right across the globe. Good design is now a top priority for many companies but there aren’t enough qualified designers to meet the demand.”

Research conducted by the institute and recruitment company Morgan McKinley pointed to a threefold increase in UX design jobs in the past five years in Ireland.

The UX Design Institute said an estimated 580,000 UX designers will be needed by 2024 for tech industry in the Europe Middle East and Africa region, to keep up with software development.

1 Am I crazy to consider switching to an Ulster Bank mortgage?
2 How long can Government afford to keep State pension age at 66?
3 PTSB plays down Ulster Bank talk as it sells €1.4bn of loans
4 How much state pension will I get next year?
5 Housing crisis here to stay in absence of big rethink, industry warns
Real news has value SUBSCRIBE