US software company ActiveCampaign to create 200 jobs in Dublin

Company says initial hires will be in support, sales, customer service and marketing 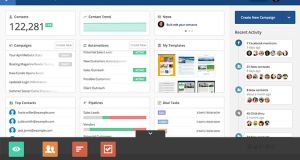 ActiveCampaign, a US sales and marketing software company, is to create more than 200 jobs in Dublin over the next three years with the opening of a new European headquarters.

It said initial hires will be focused on support, sales, customer service and marketing roles.

ActiveCampaign has developed a software-as-a-service (SaaS) platform focused on marketing and sales automation that easily integrates with the likes of Shopify and WordPress.

The company has seen significant growth recently with annual recurring revenue having grown by more than 700 per cent over the past three years to $60 million (€54 million). It has more than 75,000 customers globally.

The Chicago-headquartered company, which was founded by Jason VandeBoom in 2003, employs close to 500 people, with headcount having grown from just 27 in 2016. It has offices in Sydney, Australia and in Indianapolis, Indiana, where it also recently announced 200 new jobs.

Mr VandeBoom said while 55 per cent of revenues derived from outside of the US, the opening of its Irish office marks the first time ActiveCampaign is actively targeting customers in Europe.

“ActiveCampaign is quickly becoming the marketing and sales platform of choice for growing businesses in Europe,” said Mr VandeBoom.

“We are committed to helping these customers continue to grow and see no better way than to do that locally. Dublin’s talent and its tech ecosystem make it the perfect place for our first European office,” he added.

Meanwhile, games company Scopely said it would increase the size of its operations in Dublin and Barcelona as it plans significant expansion in Europe.

The company, which acquired Dublin-based Digit Game Studios earlier this year, is set to refurbish its existing office in the Silicon Docks area of Dublin, adding an additional floor to the office space. Although Scopely did not give specific figures, it said it was actively hiring to add to the 80 people who already work in the Dublin office. Digit developed strategy game Star Trek Fleet Command, which was published by Scopely, and will continue to add to the company’s strategy games list.

Its Barcelona office, which it established in 2017, is set to more than triple in size, with a move to a 2,400sq m office in Sarrià- Sant Gervasi. The office, which is currently being built, will give the company more space to expand, and it plans to add engineering, game design, data analysis and analytics, creative services and customer support staff.

“Both of these beautiful new spaces will allow us to align our physical presence with our rapidly expanding portfolio and team. I am excited to further lean in to the Barcelona market, which has top-quality talent,” said Javier Ferreira, Co-CEO of Scopely. “The same is true in Dublin, with top tech talent flocking to the area, and both offices have amassed impressive highly-specialised expertise. Our Dublin and Barcelona teams play a critical role in the Scopely journey, and we are actively hiring across both markets.”