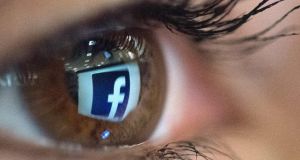 The new ‘off-Facebook activity’ tool will allow users to control data gathered by Facebook from other apps and websites. Photograph: Christophe Simon/AFP/Getty Images

Data protection experts have cast a cynical eye over Facebook’s plan to give users greater control over how their data is used.

Speaking after the social media giant announced the introduction of a new “off-Facebook activity” tool, Fred Logue, a solicitor who specialises in information law, said that “anything that enhances people’s data protection rights is positive”. However, he added that, as the social media giant “is one of the worst offenders in terms of privacy”, it is “hard to take anything the company does at face value”.

Mr Logue said the company’s decision to introduce the new tool could be an indication that actions taken by both regulatory bodies and individuals such as Austrian lawyer Max Schrems were possibly forcing Facebook to become more transparent.

“The proof in the pudding will be if this is something that affects its profits or not. If they are taking voluntary measures to enhance privacy at the expense of profits, then that is a sign that enforcement of GDPR is having an effect on them,” he said.

The Data Protection Commissioner, which is Facebook’s lead EU regulator, is currently carrying out a number of investigations into the company and its WhatsApp and Instagram subsidiaries to see if it is compliant with obligations under General Data Protection Regulation (GDPR) privacy rules. Mr Schrems, meanwhile, has been engaged in a privacy battle with the social media giant for over six years.

Jasmine Enberg, a social media analyst with eMarketer, said introduction of the new tool was “likely an effort to stay one step ahead of regulators in the US and abroad”.

If not enough people use the tool, it’s unlikely that it will have a material impact on Facebook’s bottom line

“The impact of the ‘off-Facebook activity’ tool on Facebook’s ad business depends on consumer adoption. It takes a proactive step for consumers to go into their Facebook settings and turn on the feature. As we’ve seen in the past, there is a disconnect between people who say they care about privacy and those who actually do something about it,” she said.

“If not enough people use the tool, it’s unlikely that it will have a material impact on Facebook’s bottom line,” Ms Enberg added.

Privacy rights group Digital Rights Ireland noted that the tool would not stop data being productised to sell advertising based on users’ browsing habits.

“Most internet users will be amazed to hear that Facebook is storing and productising such an array of data about their internet use and even stores and productises browsing patterns of non-Facebook users,” said Antoin Ó Lachtnain, a spokesman for the organisation.

“Secondly, this tool lets you dissociate your browsing from your Facebook account, but you are still being tracked [and] your data is still retained,” he added.