Meng Wanzhou was detained last December on a US extradition request 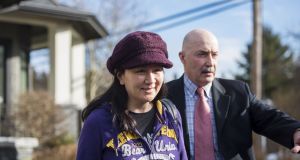 Huawei’s chief financial officer allegedly told a Canadian border official that the company has an office in Iran – an assertion potentially buttressing US claims that the Chinese tech giant engaged in activities there that violated US sanctions.

When Meng Wanzhou was detained last December on a US extradition request, she was interrogated by a Canadian border agent about Huawei’s business dealings in Iran and whether the company sold products in countries that it should not, according to court documents released Tuesday.

Ms Meng initially replied, “I don’t know,” according to an excerpt taken from an affidavit by the border agent, who then told her that it was hard to believe that the CFO of a multi-billion dollar company wouldn’t know such details. Ms Meng then allegedly said, “that her company does have an office in Iran”, according to the document.

The US has charged Huawei with operating a secret subsidiary in Iran that obtained American goods, technologies and services there in violation of US sanctions. The company has denied that it committed any violations. It didn’t respond to questions Tuesday about Ms Meng’s statement and what its office in Iran does.

The case against Ms Meng – daughter of the company’s billionaire founder Ren Zhengfei – is part of a broader US crackdown on the networking giant. The Trump administration has barred Huawei from trading with American suppliers, putting the company at the center of an escalating trade war between the US and China.

On Tuesday, the court also released footage from Ms Meng’s three-hour detention at Vancouver’s airport, showing her in a black jumpsuit and white sneakers with eight pieces of luggage piled on a cart.

The documents and footage were submitted by her defense to back its arguments that Canadian authorities deceived Ms Meng about the true nature of her detention in order to collect evidence for the US Federal Bureau of Investigation.

Her defence seeks to have the court throw out the extradition case arguing that Ms Meng was unlawfully detained, searched and interrogated instead of being immediately arrested.

According to the documents, Ms Meng was only allowed to call a lawyer four hours after she was first detained and was told by a police officer, “Yeah, if you find a lawyer sooner, you can go to the United States faster.” At the FBI’s request, Canadian border agents also compelled Ms Meng to hand over her devices and passwords and store them in special bags to protect them from being tampered with remotely.

“These authorities engaged in what might be described as a ‘covert criminal investigation,” said her defence, which is seeking the disclosure of all communications between Canadian law enforcement agencies, as well as between the Canadian and US governments regarding Meng.

Canada’s crown prosecution has until September 17th to respond to those requests. The next round of hearings is scheduled to start on September 23rd. – Bloomberg

The hub that connects women returners with jobs and training opportunities