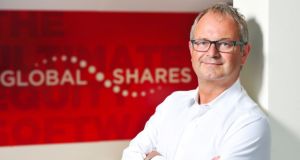 No financial details of the transaction have been disclosed but industry sources estimate Motive paid about $25 million (€21.3 million) for the stake.

Headquartered in Clonakilty, Co Cork, Global Share, which was founded in 2005, is a provider of software and services for employee equity share plan administration.

The company, which is chaired by former IFG chief executive Richard Hayes, has developed a proprietary, cloud-based platform enabling service to clients with employees across jurisdictions, time zones and languages.

Global Shares has experienced dramatic growth of late with revenue having increased 60 per cent in the past year. Employee numbers have also jumped, rising from 68 in 2015 to more than 175 currently.

“Now we have the investment we need to intensify our recruitment drive, support our growing operation and fast-track the development of more new software whilst putting Global Shares centre stage in the equity compensation industry,” Mr Houstoun said.

The deal is subject to regulatory approval, and is expected to close in the fourth quarter.

The share plan administration market is estimated to be valued over $2 billion in revenue per annum and is forecast to grow at about 5 per cent a year.

“Global Shares brings a unique and scalable technology platform paired with an exceptional service offering, making it one of the few providers that can support employee share plans on a global basis,” said Andy Stewart, a partner at Motive.

The new deal is believed to be the first in a number of investments planned by Motive locally in partnership with ISIF, a successor to the National Pensions Reserve Fund in 2010.

ISIF, an €8 billion fund that operates under the umbrella of the National Treasury Management Agency, is thought to have invested €25 million in Motive. It has also been involved in a number of recent funding rounds for Irish companies such as AMCS, Cubic Telecom and Diaceutics.

Motive has offices in New York and London, and is an investment firm focused on the fintech sector. It was established by Rob Heyvaert, former chairman and founder of Capco; Stephen Daffron, a former global head of technology and operations at Morgan Stanley and former chief executive at Interactive Data Corporation; Alberto Corvo, a former PwC capital markets technology leader; and Mike Hayford, a former chief financial officer of FIS.

1 Bank leaked my loan request to family who tried to rip me off
2 Ryanair and Aer Lingus monitor impact of coronavirus on travel to Italy
3 1,800 homes sign up as WiredScore rolls out build-to-rent certification
4 Hotels outside Dublin hardest hit by tourism slowdown
5 Mastercard to create 1,200 new jobs by expanding base in Dublin
Real news has value SUBSCRIBE