Firm operates a scheme similar to Dublin Bikes, but one using apps and QR codes 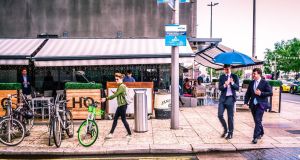 As there are no docking stations, Urbo users can start and end their journey at any designated bike parking area and simply lock them when they arrive at their destination

Urbo, an Irish start-up that rents out bicycles on a short-term basis via a mobile app and QR codes, is looking to raise €5 million as it seeks to roll out its dockless-bike schemes across major European cities, including Dublin.

The company, which last month launched its first scheme in London, brings together well-known figures in Irish cycling circles with the founders of The Dublin School of Grinds, one of Ireland’s largest private tuition schools.

Urbo operates a scheme similar to Dublin Bikes, but one that works without dedicated bike stations. Instead, the company uses smartphones and GPS to enable users to find digitally-operated bikes, that can be locked and unlocked with a QR code.

As there are no docking stations, Urbo users can start and end their journey at any designated bike-parking area and simply lock them when they arrive at their destination. They are charged via an online wallet with the possibility of users geo-fencing where bikes can operate.

The company earlier this month launched its first scheme with 250 bikes available to hire in Waltham Forest in London. It hopes to launch in 54 locations next year, including in a number of towns and cities in Ireland.

Urbo is the brainchild of Shane Connaughton, the co-founder of the well-known Cycleways shop in Dublin, and Iain Cameron, managing director of Bike to Work. The two have teamed up with Brian and Tom McGovern, who established the Dublin School of Grinds in 2010 for the new company.

Brian McGovern told The Irish Times the company has just started fundraising efforts with the aim of securing €5 million, most of which will be spent on providing bikes for proposed schemes.

“With Urbo, we have seed-funded the business ourselves to date and have just started our fundraising of €5 million . We plan to go back to the market for a significant round B in the second or third quarter of 2018,” said Mr McGovern.

He added that councils in both Ireland and the United Kingdom have shown a “high level of interest” in Urbo as it enables them to provide a bike scheme without the high costs associated with programmes such as Dublin Bikes.

Urbo is operating in a crowded market, however, and one that is beset by regulatory challenges. Rival Bleeper Bike recently found its bikes forcibly removed by Dublin City Council after it started operating its service in Ireland “prematurely”, according to the council.

New rules covering a licensing scheme for operators are due to come into effect on December 1st, the council has said.

Bleeper, which currently operates schemes in locations covered by South Dublin County Council as well as DCU and UCD, is introducing its service in the Dún Laoghaire Rathdown County Council area shortly.

Mr McGovern said Urbo hoped to be operating in Ireland by early 2018.