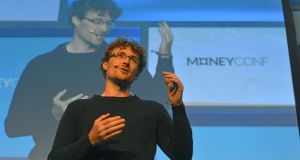 Paddy Cosgrave, Web Summit CEO: “Railsbank was a cut above the rest at MoneyConf this year and I’m really looking forward to seeing where they go in the future.”

The open banking and compliance platform gives companies access to global wholesale banking services, through a platform provided with just five lines of code. The early stage start-up was crowned the winner after three rounds of pitching against 21 other companies on-stage in front of investors and media.

Railsbank’s head of partner network Brad van Leeuwan said the win was a major validation for the team and partners. “Winning Pitch at MoneyConf is going to help us not only get our message out there but hopefully get the product to market even faster,” he said.

The company was co-founded by Nigel Verdon, who was previously involved in money exchange and payments platform Currencycloud.

“It’s inspiring to see start-ups pitch to some of the most influential figures in fintech,” said Web Summit chief executive Paddy Cosgrave. “Railsbank was a cut above the rest at MoneyConf this year and I’m really looking forward to seeing where they go in the future.”

1 Brexit: System agreed for Irish goods to skip checks on UK trade
2 ‘The rental situation stops me moving back home’
3 David McCullagh announced as co-host of RTÉ Six One News
4 Why are markets booming when a crash is on the way?
5 Ireland faces 'deep downturn' this year and may not rebound until 2024 if there is a second wave
Real news has value SUBSCRIBE