Uber IPO: The rich who will get even richer now the company is going public 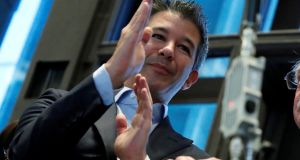 The former CEO of Uber, is the largest individual shareholder, with 8.6 per cent of shares, and will be the undisputed winner of the day

They are the spoons full of sugar that make the bitter taste of capitalism go down. When billion-dollar technology startups go public, the media tends to dig up a feel good story about some unlikely figure who stands to strike it rich.

For Facebook, it was the graffiti artist who took his fee for decorating the company’s headquarters in stock options and ended up with shares worth $200 million (€178 million). For Google, it was the part-time masseuse who joined the company when it had just a few dozen employees and retired with stock options worth millions.

Now the ride-hailing app Uber has had one of the largest initial public offerings in history, it will not be easy to identify a Horatio Alger-esque hero. Yes, the company is offering some of its most loyal drivers cash bonuses with which to purchase shares, but the rewards cap out at $10,000 for those who have completed at least 20,000 rides - the equivalent of a $0.50 tip per ride.

For the most part, the Uber rich were already, well, uber rich. Here’s a rundown of some of the fortunate few who are set to increase their already considerable fortunes on the back of Friday’s IPO.

The former CEO of Uber, is the largest individual shareholder, with 8.6 per cent of shares, and will be the undisputed winner of the day.

Though most of Kalanick’s billions were speculative before Uber’s IPO, the bad boy of tech has long been rich. After escaping a $250 billion lawsuit against his first startup, Kalanick allegedly got away with some legally questionable tax shenanigans with his second startup, Red Swoosh, before selling it, in 2007, for about $19 million. In 2018, he sold about 29 per cent of his original stake in Uber to SoftBank, reaping about $1.4bn in cash. He has since launched an investment fund.

Like Kalanick, Uber’s other founder had already successfully exited a startup before he launched the ride-hail app. The Canadian entrepreneur Garret Camp sold his first company, StumbleUpon, to eBay for $75m in 2007. Camp’s 6 per cent stake in Uber makes him the second largest individual shareholder.

The Amazon chief and world’s richest man made an early investment of about $3m in Uber that is now worth about $400m, according to tech news website The Information. The windfall is about one quarter of 1 per cent of Bezos’s current net worth ($160 billion, per Forbes), so we imagine Bezos is about as excited about this bet working out as the rest of us are when we discover a $10 bill we left in our pockets made it through the wash.

Chris Sacca is best known to the general public as the cowboy-shirt-clad “guest shark” on Shark Tank. But the longtime angel investor and VC built a reputation in Silicon Valley for his early investments in successful startups including Twitter, Photobucket, Instagram, Twilio and Uber, back when it was still going by UberCab.

Sacca retired from startup investing in early 2017, but he made headlines again that summer when, in advance of the publication of a New York Times expose on a culture of sexual harassment among venture capitalists, he published a lengthy Medium post in which he apologised for the ways he had “personally contributed to the problem”. Following publication of the article, however, Sacca disputed the specific allegation against him, but said he was “still grateful” to his accuser.

A married couple with deep ties to the Peter Thiel-wing of the tech industry (Cyan is a partner at Thiel’s Founders Fund while Scott was an early investor and board member of PayPal), the Banisters both made individual seed-round investments in Uber. The Banisters are known to be mainstays of Silicon Valley’s libertarian and rightwing political community.

While individual investors were able to get in on Uber’s earliest fundraising rounds, most of the investments came from venture capital funds. Early institutional investors include some of the biggest players in Silicon Valley, including First Round Capital, Sequoia Capital, Benchmark, Goldman Sachs, Google Ventures and Kleiner Perkins.

Two of the largest stakeholders - SoftBank and the sovereign wealth fund of Saudi Arabia - invested late in the game when the company’s valuation was already high enough that it’s not clear if they will win or lose on their bets.

Uber’s regulatory filings also reveal the size of the stakes held by some of the company’s top executives and other board members. Dara Khosrowhahi, the CEO who took over from Kalanick, will hold 196,000 shares, while the chief operating officer, Barney Harford, will have 105,000. (Harford has faced criticism for an alleged pattern of insensitive remarks about women and racial minorities.)

Thuan Pham, the longtime chief technology officer who was singled out for criticism in a viral blog post for allegedly failing to address sexual harassment and gender discrimination, will have 5,379,000 shares.

Arianna Huffington, the board member who famously attempted to counsel Kalanick through this many, many PR trials, will hold 22,000. – Guardian News Service