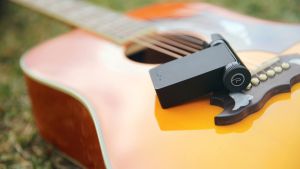 The Roadie 2 has a rechargeable battery so you’ll get a lot of strings tuned before you have to power it up again.

I have always wanted to be able to play the guitar. I started learning, years ago, and had a bet with my brother about who would master it first. But other things took over and I lost that particular wager – he has a small collection of guitars whereas I still have to progress beyond three chords.

So it’s safe to say I also have zero idea about tuning guitars. I can’t do it by ear, although I know plenty of people who can. But it doesn’t matter, because technology has found a way to make it completely idiot-proof, so even I can use it.

The Roadie hit the market a few years ago, offering people a way to quickly and easily tune their guitars through a small device that attached to the tuning pegs, and an accompanying app. The Roadie had some issues, but nothing major. You needed a smartphone, for example. But the second version, Roadie 2, ditches that requirement, putting a small display on the top of the tuner and a wheel that you can use to select different options.

Out of the box, you switch it on and choose what type of instrument you want to tune, from classical guitars to banjos and ukuleles. You can give each a unique name too, if you want to set different tunings for different instruments. Then all you need to do is attach the device to the tuning peg, and pluck the string. When it has set the tuning correctly, the device beeps, and you move on to the next one. It’s that simple.

And as someone who lives in a house with a four-year-old who like to “fix” the pegs so they all line up, it makes for a quick fix.

Of course there is an app – Roadie Tuner, not to be confused with the navigation app – but it’s not essential for using the device. You can use the app to create your own custom tunings and control settings such as the beep and vibrations. It gives you a little bit more control while still making sure that the hardware can be used most of the time as a standalone device.

Don’t just take my word for it. As I mentioned previously, I have little to no ability when it comes to playing guitars, although I can pinpoint when something is horribly out of tune. So I drafted in an expert, one who has been been playing the guitar for years and can actually tune his own instruments by ear, to see if it really worked. After one mild hiccup – failing to wait until the device beeped to move on to the next string – the Roadie 2 got the thumbs up. It does what it says on the box, and it does it well.

There is one obvious question: why not just get a guitar tuner app and skip the hardware? As someone who has no clue what they’re doing, the Roadie 2 is a useful device. But if you are experienced, it can also be a handy tool. You can save custom tunings for everything from acoustic and electric guitars to ukuleles, and access them in seconds. So if you have a few instruments in your collection, it cuts down on the time spent retuning them.

You no longer need the app to tune your guitars or even to keep track of custom tunings. It can all be stored right on the device and accessed through the small display on the top of the Roadie.

It won’t do bass guitars; for that you’ll need the Roadie Bass. Also, when there are free apps out there, at €139 it’s a little on the expensive side if you aren’t a regular player.

The Roadie 2 has a rechargeable battery so you’ll get a lot of strings tuned before you have to power it up again. Plus the display is very easy to read.

Roadie 2 makes short work of what can be a tedious job.