Device prides itself on being first with 120Hz refresh rate but its 5.7in size is a little unwieldy 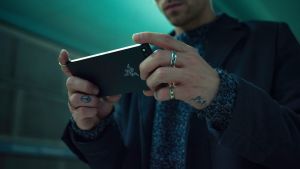 The Razer phone’s 5.7in display means it is big enough to play games, or binge-watch Netflix comfortably but makes it a little difficult to hold in one hand.

The Razer phone is made by the gaming company, and as you’d expect, it’s aimed firmly at gamers, with a big display, great speakers and excellent performance.

The Razer design is minimal – volume buttons on the left side, power on the right, just below the sim tray and that’s about it. There’s a Razer logo on the back too, standing out against the all black case.

The first thing you notice about the Razer is its quad HD display. It’s big and bold, and at 5.7in, it’s around the same size as the iPhone X and the Samsung Galaxy S8. But it’s not just about the size and pixel count. The Razer phone prides itself on being the first to have a 120Hz refresh rate, which makes everything – from the Android menu animations to your games – feel that bit smoother. It also means the display is LCD rather than AMOLED, but the difference is not something you’d notice.

The bezel at the sides has been kept to a minimum, but the top and bottom are thicker due to the camera and more importantly, the speaker grilles.

If you’re a Netflix subscriber, it supports Netflix HDR, which means better video for you.

It’s not just about the visuals though; the Razer phone has put a bit of work into the audio too, with two front-facing speakers that pump out decent sound. The phone comes with Dolby Atmos for cinematic sound, and while it’s still limited by the size of the speakers, the sound produced is certainly better than most smartphones out there.

Of course all this is moot if Razer doesn’t deliver on the games performance. Powered by a Qualcomm Snapdragon 835 processor, it also comes with 8GB of RAM, which translates into smooth performance for even the most graphic intensive games. Even the most high-powered phones can stutter at times – in my experience – but the Razer took everything I threw at it.

You would expect, with that level of performance, you would be on a short leash – or power cord. But the Razer has a 4,000mAh battery built in, which should get you at the very least, a day between charges, even if you are hammering it with games. Between work and play, I got almost to the end of the day with the Razer, which is good going for a higher level of usage than I would normally subject a phone to.

The Razer doesn’t do everything though. You don’t get headphones in the box; instead, you get an adapter so you can use your own headphones with the inevitable USB C connection. Because like others before it, the Razer has ditched the headphone jack. That means you have a choice: charge or listen, unless you go for Bluetooth headphones (which you’ll have to remember to charge).

The camera is decent, after a software update that solved a few issues. The update brought a one-touch zoom among other improvements. At 12 megapixels it’s not the highest resolution camera on an Android phone, and the image quality didn’t blow me away in the way the iPhone X or Samsung Galaxy S8+ did, but the photographs looked nice in almost all shooting scenarios. Low light was a little grainy and soft, and fast moving images weren’t the sharpest, but overall, it did a good job.

That display is simply stunning, with great colour and detail. The 5.7in display is big enough to play games, or binge-watch Netflix comfortably. The speaker grilles may mean an extra bezel on the front of the phone, but the sound quality makes it worth it. The battery life is great too, which you’ll need in a phone that’s designed for gaming.

It’s a little too big to fit comfortably in your hand, even if you have bigger mitts than mine. The camera has been improved, but it’s still just the right side of “nice”, and there are better out there.

The Razer phone removes the headphone jack, which is a trend I’m still not totally sold on. It’s just creating a market for adapters that allow you to charge and listen to your music at the same time.

Great for gaming, so job well done for Razer.