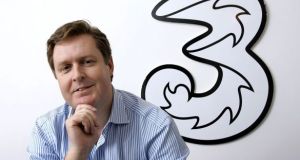 Three Ireland boss Robert Finnegan is to also take on the role as head of the group’s UK business.

The move comes as Three UK chief executive Dave Dyson announced on Thursday he was stepping down from the role after 9 years for personal reasons. He will continue to serve as a board member of the business and as an advisor to parent company CK Hutchison.

Mr Finnegan has led Three Ireland since the company launched in 2005. During that time he has grown the mobile operator’s market share from one per cent to 36 per cent. Much of that growth has come from the acquisition of rival O2 Ireland in a €850 million deal that completed in 2015.

“With the integration of the Three and O2 business in Ireland largely complete, we now have a solid platform to look at the next phase of our development. Collaborating more and progressively aligning operations and platforms with Three UK is an obvious opportunity and I am excited to be taking on this challenge as the chief executive of both operations,” he said.

Three Ireland, which employs over 1,170 people locally, is expected to launch high-speed 5G service later this year, having originally planned to do so in early 2019.

The mobile operator posted its strongest performance since entering the Irish market in 2018, swinging into profit on the back of a 7 per cent rise in its customer base and higher market share.

Accounts for the company for 2018 showed that while turnover slipped marginally by 2 per cent to €590.5 million, its bottom line performance improved with profit after tax of €19.2 million. This compared to a loss of €4.5 million the previous year.

Hutchison has pumped at least €780 million of equity into the Irish business and has also funded accumulated losses of about €840 million.

“Three UK is very well positioned to grow in the market after a period of investment in 5G spectrum and more modern IT systems and processes. Robert joins at an exciting time in our history and the combined assets of the UK and Ireland businesses are a fantastic platform to deliver against customer demand,” said Mr Dyson.