MacBook Air: Great update, but fans may zoom in on one flaw

Review: New version is a good all-rounder, but falls down when it comes to Zoom calls 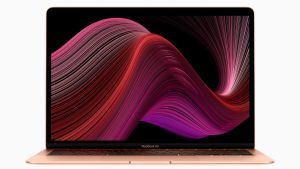 Where do you stand on the MacBook Air? I’m a fan. My own one is nine years old and, while not used quite as often these days, it’s still going strong. It may lack some of the newer bells and whistles of the updated MacBooks, but I already own it, which is an obvious bonus.

With that in mind, I was interested to see if the 2020 update to the MacBook Air would persuade me to invest in a new model.

The screen is the 13-inch Retina screen – Apple’s own standard for its high-quality screens – and your colour options for the case are grey, gold and silver.

The review version that landed on my desk came with the dual-core i3 1.1 GHz processor, 8GB of RAM and 256GB of storage on its solid state drive – the entry-level spec on the device that will set you back €1,229.

For most people, that will be fine and more than enough to tackle the basic tasks every day. If you want something a little more powerful, you can upgrade the chip to a quad-core i7 chip, increase the storage up to 2TB and boost the RAM to 16GB. That costs extra, of course, and the upgraded specs can add up to more than double the original price.

Apple says the new MacBook Air is two times faster in its CPU performance, with graphics up to 80 per cent faster than its predecessor. The basic specs allowed me to do a bit of photo editing, some iMovie work and a little trimming of audio clips, with no trouble or slowdowns. Throw in the usual word processing and a couple of light games, and the MacBook Air performed admirably. It did struggle in one surprising area, but I’ll come back to that in a bit.

There isn’t a huge difference between the new MacBook Air and its predecessors when it comes to looks. It’s sleek, minimalist and as small as Apple could possibly get everything in a 13-inch device. The ports are kept to the bare minimum – two Thunderbolt 3 ports and a headphone jack – but the Force Touch (I still dislike that name) trackpad is a decent size. Apple has found a formula that works and it is sticking with it. It’s a smart move; we’ve all seen what happens when tech companies try to introduce change.

In fact, Apple had a taste of it when it changed the keyboard. The butterfly keyboard, which replaced the tried and tested scissor mechanism, failed to find favour among Mac fans. But the new MacBook Air has the Magic keyboard, which came with the 16-inch MacBook Pro. That ditched the butterfly in favour of another scissor mechanism. The difference is noticeable, and the keyboard is much more comfortable – and less noisy – to use.

So far, so good – it gets the thumbs-up. But the 2020 Macbook Air did struggle in one surprising task – Zoom calls. Love it or loathe it, Zoom is a popular service these days. One thing it offers is virtual backgrounds. Unfortunately, unless you have a green screen, you need a quad-core i5 or better, which the basic MacBook Air doesn’t have.

That’s a minor thing, though. More limiting was the webcam, which I thought would be better. Video conferencing has become my social life outside the four walls of my home; not only are fitness classes done over the platform, but I’ve “attended” two birthday parties in the past week conducted over Zoom. The Macbook’s webcam isn’t bad as such, it’s just not as bright as I’d like. In early evening with decent light, the webcam looked a little murky. As long as you have good light, it’s fine if a little grainy; but when you compare it to the camera on the iPad Pro, for example, it falls down a lot.

On the whole, though, the 2020 MacBook Air is a good all-rounder, even if the price may make you think twice.

The good
A welcome change on the keyboard makes the 2020 MacBook Air much more pleasant to use for long period of time. The basic spec on the notebook will be fine for most users, but it can be upgraded if needed.

The not-so-good
The webcam is a little disappointing. If you plan on video conferencing a lot, make sure you have good light at all times. Maybe a ring light or two would help.

The rest
The ports are kept to a minimum on the Air, so you have two Thunderbolt 3 ports on the left, compatible with USB C, and a headphone jack on the right. Be prepared to invest in adapters, or go wireless where possible.

The verdict
The 2020 MacBook Air doesn’t rewrite a category but builds on its popularity. Just make sure your Zoom calls are in great light.