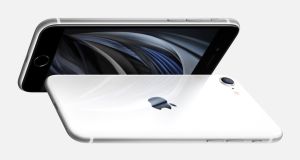 The latest addition to the iPhone range comes with the A13 Bionic chip, introduced with the iPhone 11 and 11 Pro.

Apple has unveiled a new iPhone SE,the lower-cost version of its popular smartphone, bringing an updated chip and new features to the device. The device will cost €499.

The latest addition to the iPhone range comes with the A13 Bionic chip, introduced with the iPhone 11 and 11 Pro, and is a major upgrade from the previous version of the phone, which was introduced in 2016. The chip has a dedicated eight-core neural engine, and is designed with machine learning in mind.

The phone still has a single camera system, but Apple has upgraded it to a 12 megapixel f/1.8 aperture Wide camera, with Apple’s portrait mode, all six portrait lighting effects and depth control.

It also has Smart HDR to give photographers more natural-looking images with highlight and shadow details.

“The first iPhone SE was a hit with many customers who loved its unique combination of small size, high-end performance and affordable price; the new second-generation iPhone SE builds on that great idea and improves on it in every way – including our best-ever single-camera system for great photos and videos – while still being very affordable,” said Phil Schiller, Apple’s senior vice-president of worldwide marketing.

The iPhone SE can be charged wirelessly, and supports fast charging too, so you can get a 50 per cent power boost in 30 minutes.

The one downside of the phone is that it no longer includes the headphone jack, leaving owners with the choice of Apple’s Lightning headphones or investing in new bluetooth headphones.

The phone will go on sale for preorders on Friday.