‘The Interview’ nets $15m in online sales in four days 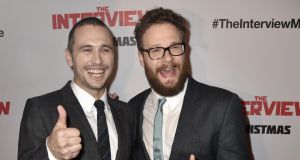 “The Interview” earned more than $15 million in online sales in its first four days of distribution as Sony bypassed a wide movie theatre release amid concerns from major cinema chains about threats of violence.

The movie, a farce about a plot to kill North Korea’s leader, was rented or purchased online more than 2 million times from December 24th through December 27th,Sony Pictures Entertainment said in a statement today.

Sony first made the movie available beginning December 24th on Google’s Play and YouTube Movies along with Microsoft’s Xbox video console and www.seetheinterview.com, a website sponsored by Sony.

The film was also released in a limited number of theaters December 25th after major chains canceled their planned Christmas Day showings after threats of violence from hackers that the FBI has linked to North Korea. The hackers had conducted a cyber-attack on Sony’s computers last month.

“The Interview” has taken in about $2.8 million in box- office sales from 331 theaters since its release, Rentrak, a market-research firm that tracks the movie business, said today. That includes about $1 million on Christmas Day. Shares of Sony rose 0.4 per cent to 2,561 yen at the close of trade in Tokyo.

The stock has gained 40 percent this year compared with a 9.4 rise in the Topix index. Culver City, California-based Sony Pictures, in its statement, said “The Interview” already ranks as its top online film ever. Sales will be helped further by Apple, which put the movie online for US and Canadian customers at about 1 p.m. in New York for $5.99 to rent and $14.99 to own.

A group called Guardians of Peace has claimed responsibility for infiltrating

Sony Pictures Entertainment’s servers, destroying data, exposing Hollywood secrets and forcing the studio to disrupt its plans for the film’s release. Last week’s online rollout marked the highest-profile feature film to debut on the Internet and gave Google’s YouTube a chance to show that it’s more than just a destination for user-generated videos. Google has been adding a growing collection of films, including “Divergent” and “The Lego Movie,” in a drive to bolster its premium content to compete with Apple’s music and video library.

The unconventional rollout of “The Interview” is the first big test for a simultaneous theatrical and online release. Typically, such debuts have been reserved for smaller films, such as independent movies that may not have enough widespread appeal to warrant a big theatrical marketing budget, according to Paul Dergarabedian, a senior media analyst at Rentrak. The movie’s arrival in theaters wasn’t met with any reports of violence. On the same day, however,

Sony’s PlayStation Network and Microsoft’s Xbox Live were hit by connection failures. Services were restored for Sony’s PS4 game console on December 27th and for Microsoft on December 26th, according to the companies. Hackers calling themselves Lizard Squad claimed responsibility for the disruptions.