Companies are discussing a potential deal to bring together Telefonica’s O2 mobile unit and Liberty Global’s Virgin Media, which also operates in Ireland 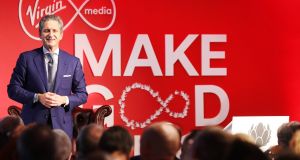 Liberty Global chief executive Mike Fries, speaking at a Virgin Media event in Dublin during a visit in 2018. The company is believed to be in discussions with Telefonica about combining O2 and Virgin Media in the UK. Photograph: Julien Behal Photography

Spain’s Telefonica confirmed it was in talks with billionaire John Malone’s Liberty Global over a possible merger of their respective businesses in the UK.

There was “no guarantee, at this point, of its precise terms or its probability of success”, Telefonica added.

Two sources familiar with the matter told Reuters on Friday that talks were ongoing.

It would be “potentially positive news for the stock if this is confirmed” Madrid-based broker CM Capital Markets said in a note to clients, adding the integration of mobile-focused O2 with a major fixed broadband provider would be complementary.

Telefonica said it would keep markets informed if a “satisfactory agreement” were reached. The company reports first-quarter results on May 7th.

Along with its large European peers, Telefonica has struggled to boost profit growth in the face of fierce competition and reassure investors it can manage a debt pile which stood at €37.74 billion at the end of last year.

Shares are down 30 per cent so far this year, having tracked broadly downwards for the past five years.

Virgin Media competes with UK pay-TV market leader Sky, owned by Comcast, in pay-TV, and with BT, Sky, TalkTalk and others in broadband.

Telefonica has been weighing options for the mobile business since 2016 when a previous O2 takeover bid from Three UK, controlled by CK Hutchison Holdings , was blocked by European antitrust regulators.

Combining O2 and Virgin Media would reshape Britain’s telecoms industry, leaving Hutchison and Vodafone without their own fixed-line consumer networks and raising pressure on BT.

Uncertainty around the fate of one Britain’s biggest mobile operators, which has been repeatedly touted as a possible candidate for sale or a stock listing, would end.

The deal would also allow Telefonica a way to partially cash out from O2 while keeping a presence in Britain. - Reuters